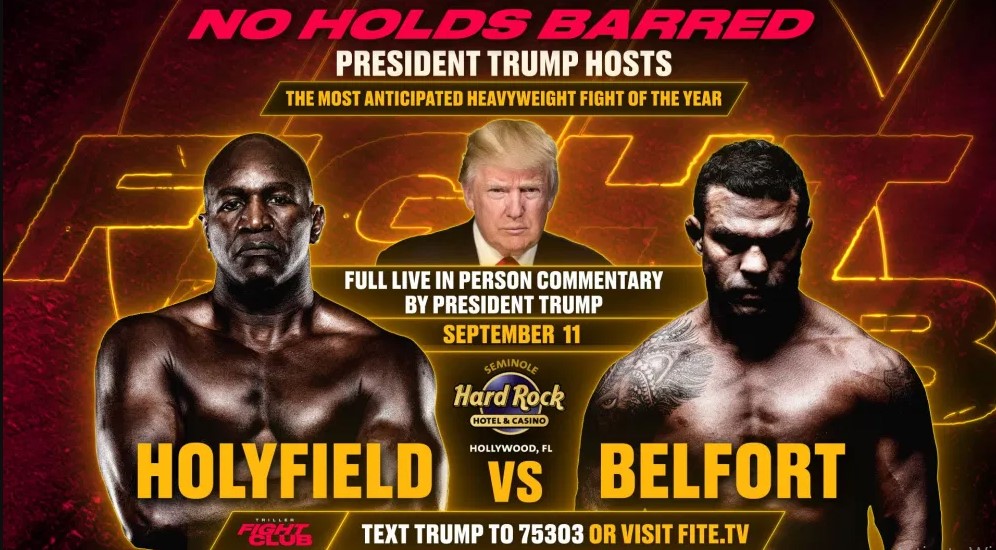 Former President Donald Trump will provide live commentary when Evander Holyfield makes his return to the boxing ring Saturday in Florida, according to FITE, the digital video streaming service that will carry the pay-per-view event.

The eight-round fight, which falls on the 20th anniversary of the 9/11 attacks, is scheduled to be held at the Seminole Hard Rock Hotel & Casino in Hollywood, Florida. It has been sanctioned as a professional bout, not an exhibition.

“I love great fighters and great fights,’’ Trump said in a news release issued by FITE. “I look forward to seeing both this Saturday night and sharing my thoughts ringside. You won’t want to miss this special event.’’

Holyfield, 58, is set to box Vitor Belfort, 44, a former UFC champion fighter who competed in the heavyweight and middleweight divisions before announcing his retirement in 2018. Holyfield is a former world champion boxer at heavyweight and cruiserweight.

A stern-looking Trump is pictured between the fighters in art to promote the fight. Triller Fight Club, which was involved in Mike Tyson’s return to the ring in November, is serving as the promoter.

Noting the event is being billed as “No Holds Barred,’’ FITE said Trump will “give an unfiltered boxing commentary.’’

Holyfield, who retired from professional boxing in 2011, originally was scheduled to fight Mike Tyson in May before negotiations between the two sides fell through. Holyfield then was scheduled to fight Kevin McBride on Aug. 14, but the fight was canceled when Teofimo Lopez, the lightweight champion featured in the main event, tested positive for COVID-19.

Belfort also has hit detours on his way to the ring. He was scheduled to fight YouTuber Michael “The Real Tarzann” Holston in June before the event fell through. Then he was set to fight Oscar De La Hoya on Saturday before De La Hoya announced Sept. 1 that he had been hospitalized with COVID-19.

Holyfield then agreed to fight Belfort.

The pay-per-view event, which is priced at $49.99, also includes boxing matches between retired UFC champions Anderson Silva and Tito Ortiz.