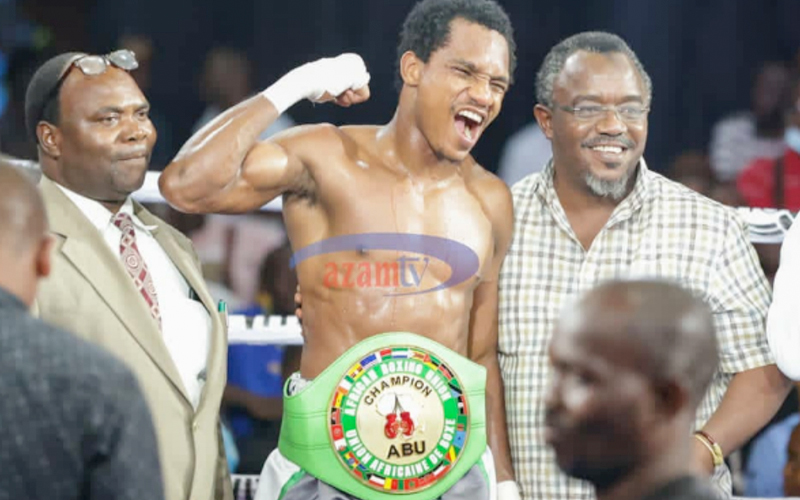 Mwakinyo pounded Indongo (23-4, 12 KOs) into submission in the fourth of a scheduled 12 round fight on September 3 in Dar es Salaam to retain his ABU title, and in the process inched closer to his cherished ambition of vying for a world title.

“I was very happy to defeat policeman Indongo. That’s like defeating the Namibian government because my opponent is a cop,” said Mwakinyo in a phone interview.

“I was very cautious when the fight started because my countryman Rashid had lost his title, I couldn’t let down my country, my family, my fans,” stated Mwakinyo whose compatriot Tony Rashid was dethroned by Bongani Mahlangu who became the new ABU super-bantamweight champion by stopping the Tanzanian in the 12th round.

“I faced a lot of challenges before the fight and decided to approach Azam TV to support me,” said Mwakinyo who’s also the International Boxing Federation Inter-Continental super-welterweight champion, a title he captured last year in Dar es Salaam via a unanimous decision over Tshibangu Kayembe from the Democratic Republic of Congo, and successfully defended it by defeating Argentina’s Jose Carlos Paz whom he stopped in the 4th round.

“I had to struggle for funds through my promotion company I’ve started to assist upcoming boxers because promoters have become unreliable,” says the 26-year-old Mwakinyo, 20-2 (14 KOs).