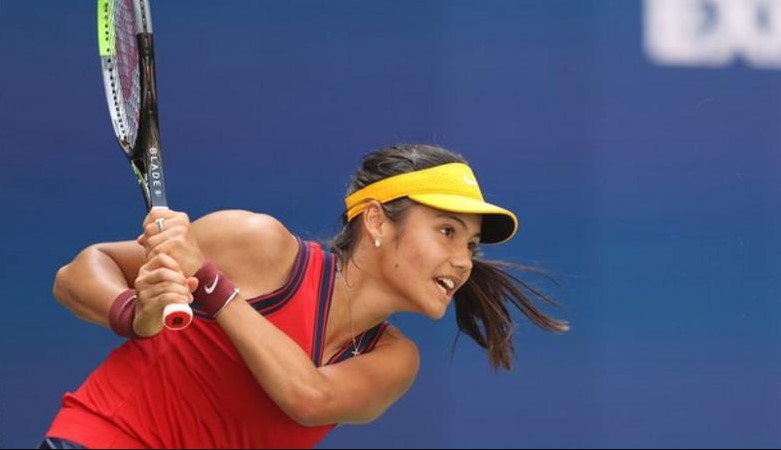 British teenager Emma Raducanu continued her fairytale run at the US Open by reaching the semi-finals with a dominant straight-set win over Swiss 11th seed Belinda Bencic.

Victory means she will rise to the cusp of the world’s top 50 and become the British women’s number one.

It will be the second of the women’s singles semi-finals and will be played about 21:00 local time in New York (01:00 GMT, Friday).

In only her second Grand Slam appearance, world number 150 Raducanu has become only the third woman ranked outside the top 100 to reach a US Open semi-final.

After coming through three qualifying matches to reach the main draw, Raducanu is yet to drop a set in her eight matches at Flushing Meadows.

With her run in New York, Raducanu has recorded several notable achievements, including becoming:

When she sealed victory with her first match point, Raducanu clasped her head with her hands before 24-year-old Olympic champion Bencic sportingly came around the net to warmly embrace the victor.

A beaming smile broke out across the Briton’s face as she pointed to her team – in a mixture of shock and celebration – and contemplated what she had just achieved on Arthur Ashe Stadium.

“Belinda is such a great opponent and in good form, her ball speed caught me off guard so I had to adjust and adapt.

“I’m just taking care of what I can control and I’m on my own journey.”

The fairytale of New York continues for Raducanu

Three months ago, few outside British tennis knew Raducanu. Then she was ranked 361 in the world.

Raducanu’s world changed with a stunning run to the Wimbledon last 16 – after being given a wildcard on her Grand Slam debut – and her star has continued to rise following another series of displays in New York which have belied her years.

After cruising through to the quarter-finals with a string of assured performances, playing Bencic in the last eight was supposed to be a step up in difficulty for Raducanu.

Questions were asked about how she would deal with a opponent with a greater pedigree than she had faced before, along with the weight of the occasion.

Raducanu handled it in the same manner as she did the other victories at Flushing Meadows: with composed execution, clarity of thought and, still, a sense of enjoyment.

Against Bencic, Raducanu was facing a top-40 opponent for the first time. Not only that, it was the world number 12 who won Olympic gold in Tokyo last month and had continued to ride the crest of a wave in New York.

Yet, after a slightly nervy start where she trailed 2-0, Raducanu grew in confidence to take control and left Bencic increasingly frustrated as the Kent teenager completed another remarkable victory.

Raducanu’s on-court maturity and ability to cope with the growing scrutiny has been one of the youngster’s most impressive traits, leading to 18-time Grand Slam singles champion Martina Navratilova describing her “as almost like a finished product when she is just getting started”.

After the slow start, Raducanu hit the sideline with a fizzing forehand that helped her hold the third game and get on the scoreboard for the first time.

Having found her rhythm and timing, she began to unsettle Bencic with her aggressive play – particularly on the Swiss’ second serve – and it reaped reward. Bencic produced a double fault at deuce in the sixth game, and then hit a backhand into the net, to hand the break back.

From that point, Raducanu cut a more positive figure.

It was the second of five games in a row as the Briton took the opening set, a similar swing in momentum to her last-16 match against American hope Shelby Rogers.

From the regular position of a frontrunner, Raducanu has been impenetrable and she continued to pile pressure on Bencic in the fifth game of the second set.

Another double fault from the Swiss – this time on break point – came at the worst possible time and handed the advantage to the teenager.

Bencic whacked her chair with the racquet at the changeover and her body language – putting hands on hips, slapping palms on thighs, gesticulating at her team – illustrated her annoyance at not being able to handle Raducanu’s power.

That was in contrast to Raducanu, who mixes sharp intensity during the points with almost insouciance between them.

Seconds before serving for the match, she flashed a beaming smile and casually tossed her racquet in the air.

Then it was back to business and, like the previous service game, she trailed 30-0 before fighting back for the biggest win of her life with booming baseline strokes and accurate serving.

‘It’s incredible what she is doing’ – reaction

Former British Davis Cup player Miles Maclagan on BBC Radio 5 Live: “It’s astounding the way she has done it. She has breezed through! There’s a sureness of where she belongs in the game and it’s not a surprise to her. It’s an ability to keep a calm head and have perspective at this age.

“Raducanu just needs to keep that rhythm going and not think too much. She appears to have mastered that already.

“She is not a great yet as there’s a lot for her to do and achieve, but she is playing phenomenal tennis.

“There are a lot of very good players who haven’t won a Grand Slam but Raducanu is defying the odds, isn’t she?”

Naomi Broady, British tennis player, on BBC Radio 5 Live: “It was just relief at the end to get over the line. It’s fantastic. She is out there thanking her team because she knows already it’s a team effort.

“Everyone might say we need to calm down but because of the run she’s on now, I think we can live in the moment.”

Gigi Salmon, Radio 5 Live tennis commentator: “She has dismantled Bencic like she has with all those who have gone before her. She is the new world number 51. She is also the British number one. But most importantly, she is a Grand Slam semi-finalist. It is absolutely incredible what she is doing.”