We have a fight: Oscar Valdez-Robson Conceicao ESPN Weigh-In Results From Tucson 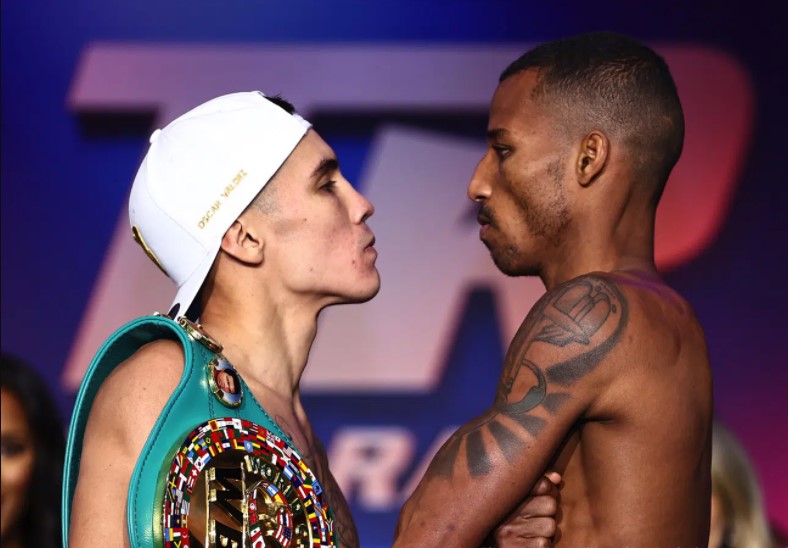 Given the amount of controversy in the pre-fight buildup, Oscar Valdez and Robson Conceicao at least spared the sport of any drama at the scale.

Both boxers made weight ahead of their WBC junior lightweight title fight, which takes place Friday evening on ESPN and accompanying platforms from AVA Amphitheater at Casino del Sol in Tucson, Arizona.

Valdez weighed 130 pounds for his first fight back in his childhood hometown since 2017, though not before having to remove his socks and clear room on the stage before hitting the mark. Conceicao was 129.6 pounds for his first career title fight, making weight without any additional effort.

The homecoming for Valdez comes four years nearly to the day of his September 2017 win over Genesis Servania in a WBO featherweight title defense. A lot has changed in that time, including a second divisional title claimed and his good name speared amidst a recent drug testing scandal leading into this fight.

Valdez (29-0, 23KOs) tested positive for trace amounts of Phentermine, as discovered during an August 13 test as contracted by Voluntary Anti-Doping Association (VADA). The results were discovered on August 30, with an emergency meeting held by the Pascua Yaqui Tribe Athletic Commission which included Valdez’s hired attorney Pat English, representatives from Top Rank staff and legal team and members of the WBC.

In the end, the commission cleared Valdez—a 30-year-old two-division titlist from Nogales, Mexico—to fight after deferring to World Anti-Doping Agency (WADA) code in its ruling. The substance in question is banned only during in-competition according to WADA, whose policies are followed by nearly every authority under the Association of Boxing Commissions (ABC). The outcome touched a nerve with many in the industry since it chose to ignore the rules set forth by VADA, whose program Valdez violated as the independent agency carries one banned list, not differentiating between in- and out-of-competition.

All told, Valdez keeps his WBC ahead of his first title defense. Valdez became a two-division titlist following his highlight-reel tenth-round knockout of long-reigning champion Miguel Berchelt this past February 20 at MGM Grand Conference Center in Las Vegas.

Conceicao (16-0, 8KOs) enters his first career title fight, coming versus an opponent with whom he shares good history. The three-time Olympian and 2016 Olympic Gold medalist owns an amateur win over Valdez, defeating him in the 2009 Pan Am Championships in Mexico City. The 5’10” contender from Salvador, Brazil made history for his nation, becoming the first-ever Brazilian boxer to win an Olympic Gold medal following his run in 2016 Rio as a lightweight.

In his most recent pro start, Conceicao scored a seventh-round stoppage of Jesus Antonio Ahumada this past April in Tulsa, Oklahoma.

Flores weighed 129.6 pounds for his first fight since a sensational sixth-round stoppage of Jayson Velez this past February on the Valdez-Berchelt undercard. Lopez weighed a lean and fit 128.4 pounds as he looks to extend his current five-fight win streak.

Below are the weights for the remaining undercard bouts which air live on ESPN+ beginning 5:30 p.m. ET.