Stunning Emma Raducanu through to all-teenager US Open final 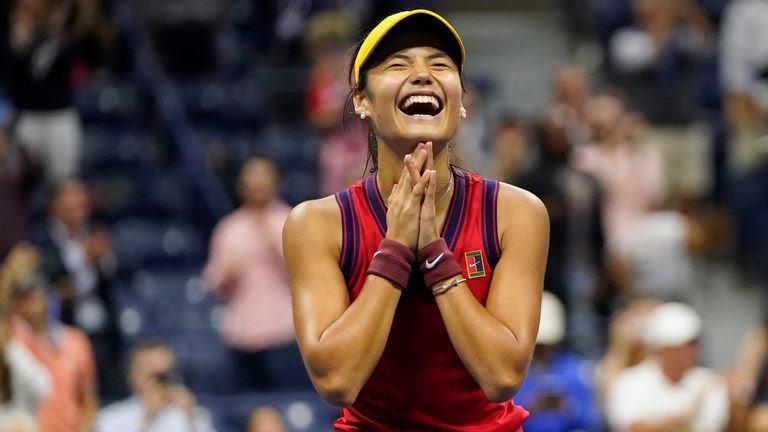 Emma Raducanu is through to the final of the US Open after defeating Maria Sakkari of Greece in straight sets.

The British 18-year-old has now become the first qualifier in history to ever reach a grand slam final – and the youngest since Maria Sharapova won Wimbledon in 2004 when she was 17.

Thursday night’s stunning 6-1 6-4 win means just one match stands between Raducanu and one of the most extraordinary achievements in tennis history.

The teenager stormed past No 17 seed Sakkari in the first set in just 36 minutes. She won the first five games, helped by 17 unforced errors on Sakkari’s part.

An early break in the second kept Sakkari at bay – and only an extraordinary rally at break point prevented Raducanu from taking a 5-2 lead.

It’s now going to be an all-teenager final in the US Open. Raducanu is set to face Canada’s Leylah Fernandez, who turned 19 this week, on Saturday.

Raducanu is currently ranked 150th while Fernandez is ranked 73rd – and this is set to be the first major final between two teenagers since a 17-year-old Serena Williams defeated Martina Hingis, also in the US Open, in 1999.

Speaking on court after her semi-final win, Raducanu said: “Honestly the time here in New York has gone so fast. I’ve just been taking care of each day and three weeks later I’m in final. I can’t actually believe it.”

And when asked about her chances in the final, she added: “Is there any expectation? I’m a qualifier so technically there’s no pressure on me.”

In the run-up to the semi-final, Raducanu had said that she didn’t expect to advance so far at all – so much so that her flights home had been booked at the end of qualifying.

Raducanu was ranked outside of the top 350 in June, but now she is projected to rise to at least 51 in the world on Monday – and potentially even further after this latest win.

That will make her the British number one ahead of Johanna Konta and Heather Watson.

Jo Durie, the last British woman to reach the US Open semi-final back in 1983, is now predicting big things for Raducanu’s future.

She said: “[Emma has] got such a good solid game – she can hit the ball hard at the right time, and her serve stands up under pressure.

“She works very hard at her game and with all of that behind her, for me it points to her being consistently up there in the future.”