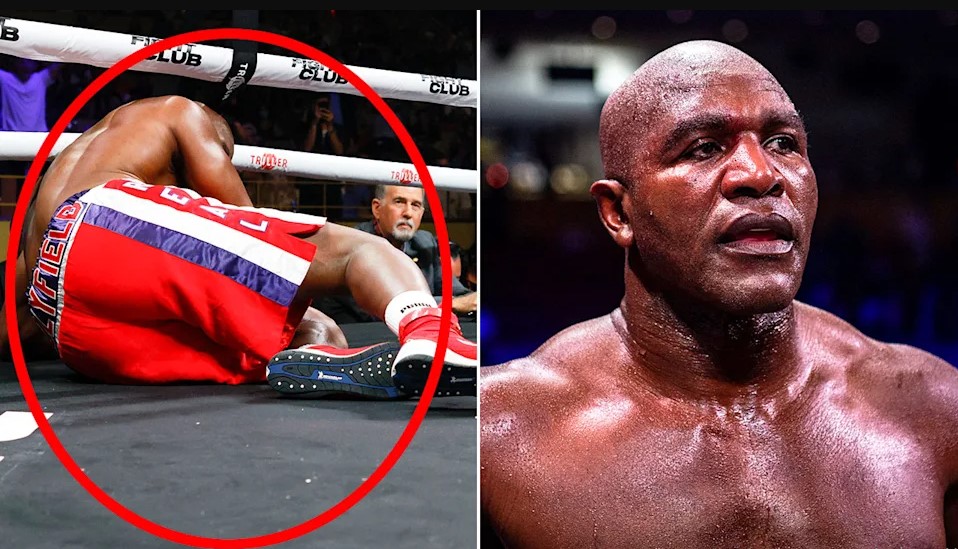 Former heavyweight world champion Evander Holyfield has made an ignominious return to the boxing ring in a bout that has left fight fans outraged.

The Hall of Fame boxer looked all of his 58 years in a chastening first-round technical knockout loss to mixed martial arts star Vitor Belfort.

At one point the former boxer slipped through the ropes after throwing a wild haymaker that caught nothing but fresh air.

Holyfield regained his feet only to be sent to the canvas by a vicious combination from Belfort.

On that occasion he beat the count, but Holyfield was soon rattled by another flurry of blows that left the referee with little choice but to stop the fight.

Holyfield was about the only one who seemed to object to the referee’s decision, with many viewers questioning what he was doing in the ring – against a much younger and quicker fighter – in the first place.

Holyfield was fighting for the first time since he defeated Brian Nielsen in 2011 to cap a glorious ring career.

Holyfield won 1984 Olympic gold as a light heavyweight and went on to dominate the professional cruiserweight division before entering prize fighting lore as a heavyweight.

He’s best known for a championship heavyweight run that included two wins over Mike Tyson, one of them the infamous “Bite Fight,” a win over George Foreman, and one win over Riddick Bowe in their punishing trilogy.

Holyfield said he was ready, having been preparing for a proposed comeback bout against Kevin McBride that didn’t come off.

Asked after the fight if he was still interested in making a rematch with his old nemesis Tyson, Holyfield said, “Of course.”

The boxing great insisted that he wasn’t hurt during the barrage of hits from Belfort and called it a “sad” end to the much hyped bout.

Evander Holyfield ‘not the same fighter’

But even Trump, who tirelessly boosted Holyfield throughout his undercard commentary, seemed taken aback by the ex-champ’s performance.

“Right from the beginning he was not the same fighter. He lost a lot. It was not Evander Holyfield.”

Trump received a rapturous welcome from fans at the Florida venue, where he arrived after visiting New York on the 20th anniversary of the 9/11 attacks.

He got in a dig at President Joe Biden and a plug for his friend Dana White, promoter of mixed martial arts brand Ultimate Fighting Championship, in low key commentary alongside his son Donald Trump Jr.

The former president is no stranger to boxing, his hosting of major fights at his hotels and casinos having earned him a place in New Jersey’s boxing Hall of Fame.

Trump’s commentary for the card put together by Triller, the music video app that is trying to break into boxing with its Triller Fight Club streaming platform, included remembrances of fights and fighters past along with random observations on the sport.

“It’s like elections, it could be rigged, too,” Trump noted of some questionable fight results he’s seen in the past.

In an earlier fight, mixed martial arts legends Anderson Silva and Tito Ortiz – both 46 – took their talents to the boxing ring with Silva scoring a brutal first-round knockout.

Ortiz paid the price for an aggressive start when a counter from Silva sent him to the canvas for the count.

“This fight I thought was amazing, even though it was very short,” Trump said.

“We didn’t have to wait around all night long.”