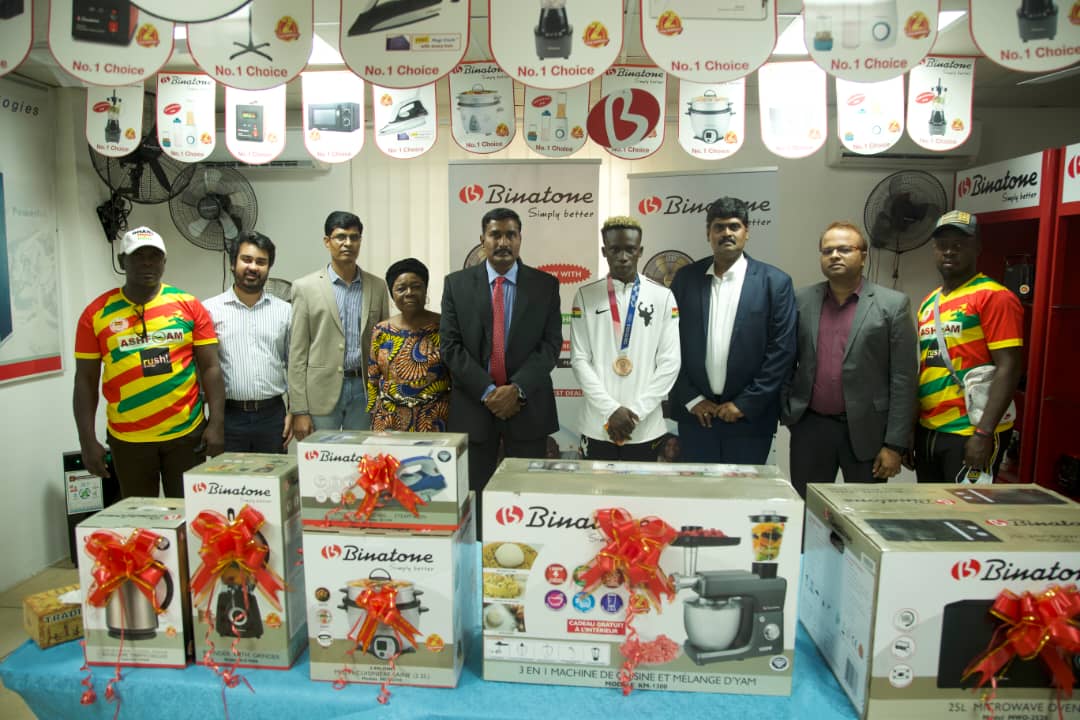 The boxer was the only athlete on Team Ghana to win a medal at the Games.

He became the first athlete in 29 years to win a medal for the country.

Samuel Takyi and the Black Bombers team were at the offices of Binatone Ghana to receive their package after achieving the historic feat.

He also said “Samuel Takyi made our country Ghana proud, and we are proud of him. Many countries participated but not all of them went home with medals.

“Ghana is among the countries that went home with a medal. Ghana achieved this because of Samuel Takyi’s dedication, hard work and sacrifice.”

Mr. Babu further stated that Binatone is well known worldwide for over 60 years for excellence in quality home appliances and has been in Ghana for over 25 years.

“Excellence is also Mr. Samuel Takyi’s present achievement in boxing and we are sure Samuel Takyi has made the Ghana Boxing Federation also very proud. The training they gave him has borne fruits,” the Binatone Ghana chief added.

In their various responses, Mr. Samuel Takyi’s team thanked the company for this noble and laudable gesture.

They added that Binatone is the first company to recognise Takyi’s incredible accomplishment to invite them to their premises.

They entreated the company to support their efforts as they are training young people as young as seven years to become future Boxers. Their latest discovery is Mr. Samuel Takyi.

They hoped the meeting will propel the company to give future assistance that will lead to cooperation between the Ghana Boxing Federation and Binatone since the Commonwealth Games and other competitions are round the corner. They also look forward to a fruitful collaboration.