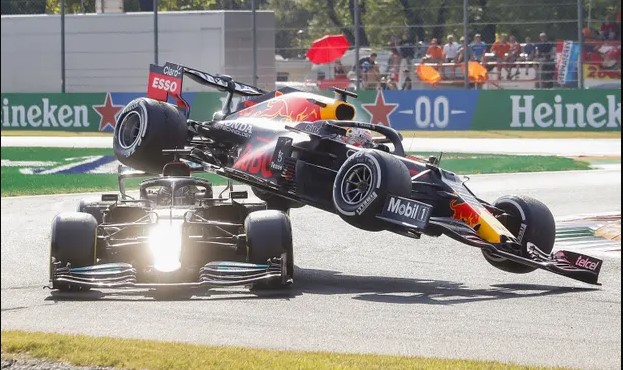 Formula One has the championship fight it has long craved but at the Italian Grand Prix Lewis Hamilton’s and Max Verstappen’s rivalry became physical and worse still, potentially fatal. The plaudits belonged to McLaren and a remarkable one-two for Daniel Ricciardo and Lando Norris at Monza but the drama that has fuelled this fascinating season was centred once again on the two title protagonists, now focused on a fight so intense that neither seems willing to yield so much as an inch.

There were shades here of the great F1 rivalries. Of Ayrton Senna and Alain Prost, of Nigel Mansell and Nelson Piquet and in very specific terms of Michael Schumacher and Damon Hill, who also hit one another at Silverstone and Monza in their 1995 battle.

Early in the season Hamilton and Verstappen had briefly touched several times, with both to an extent giving way to avoid a major incident. Now the tension is ratcheting up with only five points between them, their clash at the British GP still fresh in the memory, and that spirit of rapprochement is rapidly disappearing. Neither is willing to cede position or show weakness that might be exploited. At Monza the resulting clash had an almost inevitable air.

After a frenetic start the racing had settled down through the pitstops when their race came to head in the briefest of moments turning though the first, Rettifilo chicane.

Hamilton had exited from his pit stop, emerged wheel to wheel with Verstappen and the pair went into the first chicane together. Hamilton had his nose ahead but Verstappen had the pace to try to pass on the outside of turn one and as they entered turn two with Verstappen’s car riding over the high sausage kerbs he was pitched on to Hamilton’s car, with both grinding to a halt in the gravel, the Red Bull still perched on top of Hamilton’s Mercedes.

Verstappen climbed out, glanced at Hamilton in his cockpit and immediately strode away. The accident was life-threatening. Verstappen’s car had ridden over the back of Hamilton’s with his right rear wheel rolling over the roll hoop and descending on to Hamilton’s head but crucially being diverted enough from a full impact by the halo cockpit protection device, once more definitively proving its worth.

Hamilton blamed Verstappen. “He knew what was going to happen,” he said. “He knew he was going over the kerbs. Went into turn one ahead, and ahead in turn two then all of a sudden he was on top of me.”

The Mercedes team principal, Toto Wolff, described it as a calculated move by Verstappen to prevent Hamilton from winning and warned that worse may follow. “I would say it was a tactical foul,” he said, “He probably knew that if Lewis stays ahead that’s the race win. It was clear for Max that it would end in a crash.”

Hamilton remained in the car before emerging unscathed but bruised and acknowledged the halo had saved his life. “I’m a little bit stiff and sore on my neck because it landed on my neck but I’ll be OK,” he said.

Verstappen insisted he thought Hamilton could have given him more room and that the Briton was at fault. “I didn’t expect him to keep squeezing, squeezing and he didn’t even need to,” he said. “If he left me a car’s space, we would have raced out of turn two and he would have probably still been ahead. But he just kept pushing me and there was nowhere to go.”

The incident was investigated after the race and the stewards deemed Verstappen was “predominantly to blame for the collision” and awarded him a three-place grid penalty for the next round in Russia. The decision was welcomed by Hamilton.

“I am proud of the stewards,” he said. “It definitely sets a precedent. It is important for us moving forwards for the safety of the drivers that there are strict rules set in place.”

It had not looked likely the two would be in a fight until the end, given that before the incident Verstappen in second had enjoyed a good four-second lead over Hamilton, who was in fourth. The front four were within six seconds when McLaren pitted Ricciardo on lap 23 and Verstappen stayed out, as Red Bull looked to over-cut the Australian. However his pit stop was a shocker, boxed for 11.1sec with a problem with the front right; the extra time put him right into Hamilton’s path to end with an impact that will echo across the season.

For McLaren it was a joyous affair, ending the team’s nine-year winless drought since Jenson Button took the flag at Brazil in 2012 and their first one-two since Canada in 2010. Ricciardo had not won at Monza before, and it is his first victory for McLaren, his first since Malaysia in 2016 and the eighth of his career.

They had looked strong after Ricciardo made an excellent start to take the lead from Verstappen, and once Hamilton and Verstappen had gone out Ricciardo delivered with all the calm confidence he has displayed at his best in the past. The title leaders must consider how they can regain their composure amid a frenetic and potentially fractious run-in to end of the season.

Carlos Sainz was sixth for Ferrari, with Aston Martin’s Lance Stroll in seventh. Fernando Alonso and Esteban Ocon were in eighth and tenth for Alpine and George Russell in ninth for Williams.