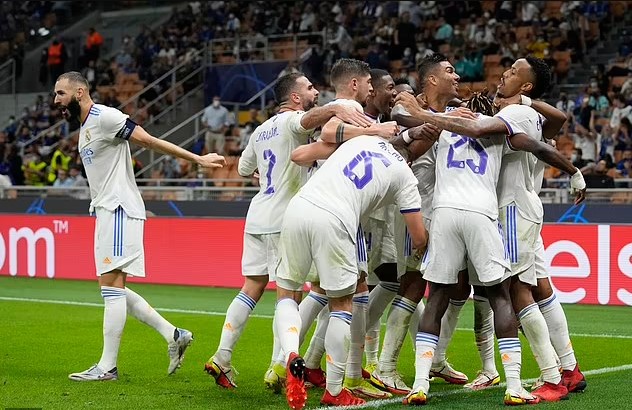 The coach brought on Rodrygo, 20, on 65 minutes and then Camavinga, 18, with ten minutes left at San Siro and the game goalless after the Italians had dominated the first half. With time running out, Camavinga — signed for €30 million from Rennes on transfer deadline day — was spotted by midfielder Federico Valverde inside the box, and his volleyed first-time cross was buried by Rodrygo.

“We have young players who are strong,” Ancelotti said in his post-match news conference. “I have to add experience, that’s normal in this kind of game, but this team has youngsters with a lot of quality, a lot.

“[I’ve told Rodrygo] that how many minutes you play isn’t important, it’s how you play,” Ancelotti added. “He had 20 minutes and did well, not just with the goal, but also defensively. In front of goal he’s very cool-headed… His role is important, sometimes he can play from the start, other times he can come on and be decisive.”

Rodrygo — brought in as a €45m teenager from Brazil in 2019 — has a knack of delivering in the Champions League and gave Madrid a 3-2 home win over Inter in last season’s group stage with another late strike.

Midfielder Camavinga has wasted no time settling in at the Bernabeu, scoring a goal on his LaLiga debut last weekend in a 5-2 win over Celta Vigo, and now adding an assist in his first Champions League game for Los Blancos.

“He’s a player who can play for Real Madrid, that’s why signed him,” Ancelotti said. “He’s very young but he has a lot of quality. We have to be patient with him so that he has the opportunity to progress well. He has to improve in the defensive aspect and he will in the future.”