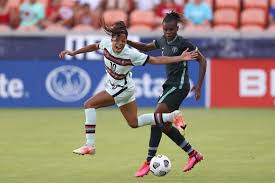 Monday Gift was the hero as the Super Falcons of Nigeria beat Mali 2-0 in the opening match of the 2021 Aisha Buhari Cup.

The Randy Waldrum girls ensured that the country’s unbeaten run against the Flying Eagles of Mali was maintained with the victory on Wednesday at the Mobolaji Johnson Arena in Onikan, Lagos.

The Falcons had a shaky start to the game, with the Malians overrunning them from the midfield to the attack.

The Malian attackers made it a difficult start for Nigerian defence led by the experienced Onome Ebi.

However, the proceeding changed in the second half with the introduction of Gift and Uchenna Kanu.

The substitutes injected their freshness and exuberance in the final third, and Nigeria began creating a flurry of chances.

Oshoala missed two perfect chances in quick succession as she failed to direct a grounder from Ordega towards the goal from just six yards.

Minutes later, she opted to round up the Malian goalkeeper instead of shooting in a one-view-one situation, allowing the goalie to scoop the ball easily.

However, in the 82nd minute, the Falcons finally broke the deadlock through a Monday Gift glancing header off Oshoala’s cross.

The Robo Queen FC’s striker then added the second in injury time, skilfully lobbing the onrushing goalkeeper after Oshoala set her through with a looping header.

The Falcons will take the victory advantage to their next game against South Africa on September 21.