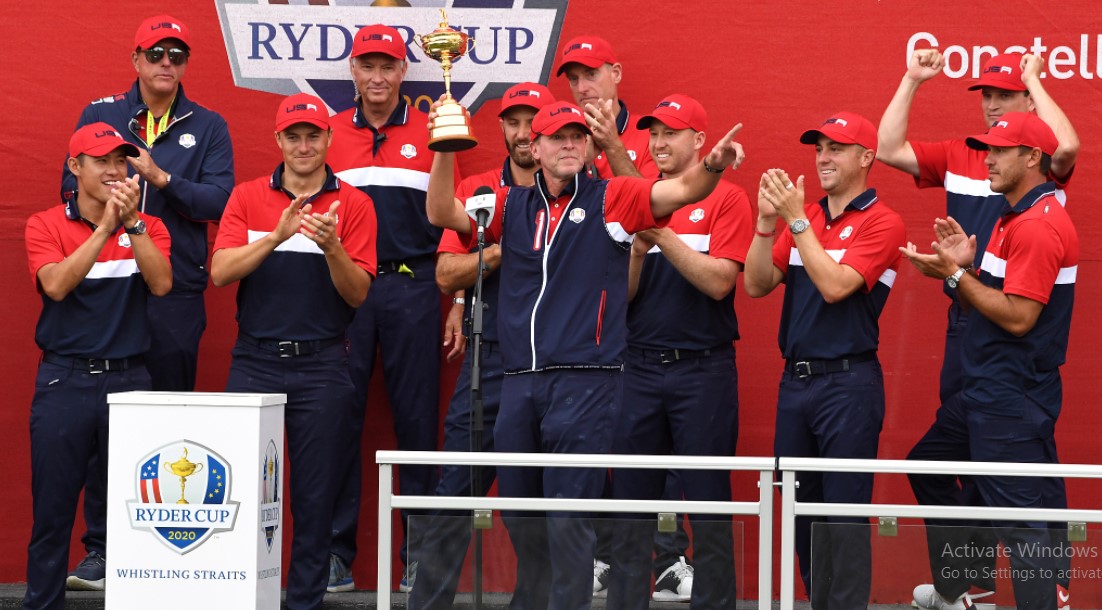 Yes, Europe wanted to win the Ryder Cup on Sunday at Whistling Straits; of course it did. But the Europeans needed an epic comeback, a “miracle,” as Ian Poulter called it. The 11-5 advantage the U.S. held heading into Sunday was its largest ever. In a way, it was a European goal simply to make sure it wasn’t an American coronation before happy hour.

But that didn’t happen, either.

Rory McIlroy won the first match of the day, but it was all red, white and blue behind him, as the Americans responded with three consecutive convincing victories, plus a tied match, pushing the U.S. to the 14.5 points it needed to secure the 43rd Ryder Cup. The victory was sealed with seven matches still on the course, and it eventually finished as a 19-9 U.S. rout — the largest win in the modern era of the Ryder Cup.

This is the greatest team of all time, right here. These guys are unbelievable.

Rookie Collin Morikawa earned the Ryder Cup-clinching point. He birdied the par-3 17th to go 1 up on Viktor Hovland, which secured at least a half point to get to 14.5, but it wasn’t official until about 15 minutes later, when Hovland won the 18th to tie the match. But it was still a half-point for Morikawa and the U.S. on the scoreboard — enough for the victory to be set in stone. The U.S. wins back the Cup it lost in Paris in 2018. It’s the Americans’ second win in the last six meetings, and just the third in the last 10.

“From Day 1, it was about out-preparing,” said U.S. captain Steve Stricker. “Just getting these guys here, getting them on the same page. This is a new era of USA golf. They are young, they come with a lot of passion, a lot of energy, a lot of game, and they are just so good.”

Europe has long dominated the biennial match-play exhibition, but now, the U.S. hopes, this week at Whistling Straits was the official turning of the tide. Europe has often been the underdogs on paper, yet has still found a way to be the better team come Ryder Cup week. Call it commitment. Call it luck. Call it team unity. Doesn’t matter, the Europeans have always had Ryder Cup magic the U.S. lacked — until this week.

“This is the greatest team of all-time, right here,” Stricker said. “These guys are unbelievable.”

The Americans, with nine players in the top 11 of the World Ranking, dominated with a roster comprised of six rookies. Europe, on the other hand, might be on the verge of a changing of the guard, as four of its Ryder Cup mainstays are in their 40s and at least a couple of them have likely played in their last.

McIlroy took down Xander Schauffele 3 and 2 in the first of 12 singles matches on Sunday, giving McIlroy his first win of the week after two previous days of disappointing play.

But the board was red behind the first pairing, and the first win came from rookie Scottie Scheffler, who has yet to win on the PGA Tour but earned 2.5 points this week as a captain’s pick. He even punctuated his week by taking down World No. 1 Jon Rahm in singles play, dusting the Spaniard — and the best player all week long — 4 and 3. It was Rahm’s only loss of the week.

Patrick Cantlay soon beat Shane Lowry 4 and 2, and about 45 minutes later Bryson DeChambeau beat Ryder Cup stalwart Sergio Garcia 3 and 2. That pushed the U.S. advantage to 14-6, meaning the Americans were just a half-point away from victory. When Morikawa stuck an iron from 221 yards to 3 feet on the 17th hole and made birdie, the U.S. win was guaranteed, but it wasn’t official until the 18th. Hovland won the hole with a par but Morikawa still earned the half-point necessary.

The celebration was underway as more matches finished.

Justin Thomas added a 4-and-3 win over Tyrrell Hatton, and Daniel Berger won 1 up over Matt Fitzpatrick. Jordan Spieth and Tommy Fleetwood tied.

When the matches were all finished and the crowd started to clear — but with the real party just getting started — Stricker and the U.S. team were presented with the trophy. It was an emotional moment for the captain, who lives in Wisconsin, to be able to deliver a Ryder Cup victory in his home state.

“You know, I never won a major,” Stricker said, tearing up, “but this is my major, right here.”