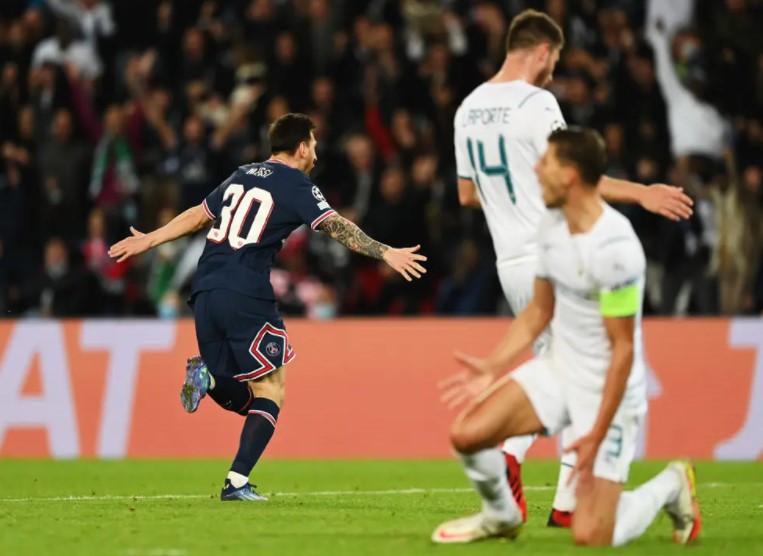 Messi, making his fourth appearance for PSG since leaving Barcelona, ran from the halfway line before playing a one-two with Kylian Mbappe and leaving Ederson rooted to the spot with a lovely 20-yard shot.

The roar from the Parc des Princes crowd was deafening as the Argentine, on his return from injury, added one PSG goal to the 672 he managed for Barca.

Idrissa Gueye had given last season’s French runners-up an early lead with an excellent drive into the top corner.

City had plenty of chances to score in between those goals with Raheem Sterling’s header hitting the bar and Bernardo Silva striking the woodwork from the rebound with an empty net in front of him.

They also had seven shots on target but could not beat Champions League debutant Gianluigi Donnarumma in PSG’s goal.

The second age of Messi begins

The first three games of Messi’s spell at PSG – which has been interrupted by injury and fitness issues – had failed to set the world alight. No goals and no assists.

But this was the night that all changed as he glided across the Parisian turf, gave the ball to Mbappe and got it back with a backheel before bamboozling Ederson with his shot.

The build-up to this match had all been about whether he would return form a knee injury which had kept him out for a couple of games. There was a huge cheer from the fans before the game as his name was read out in the starting XI.

Messi celebrates with his PSG teammates

He was involved earlier in the move for the opening goal too, finding Mbappe outside the box.

Mbappe’s pass was air-kicked by Neymar, with Gueye then scoring a beauty.

Messi’s only shot was the goal – but on a night when City made PSG work hard, the veteran did his fair share too.

Almost a third of his touches were in his own half, including when he tackled Riyad Mahrez just outside the box.

Even at the end, he performed the draught excluder role in the wall for a Kevin de Bruyne free-kick – a position almost invented to defend his own free-kicks.

PSG – who have won all their Ligue 1 games to date – are a different team than the one who lost both legs to City in last year’s semi-final.

Gueye and Marco Verratti, back from four games out injured, were excellent in central midfield – and the team defended well too to keep City out.

Donnarumma, in goal, made seven saves as well as four claims or punches. Ederson in the other goal only made one save.

This ended a run of four consecutive Champions League matches without a win – including both City games last season.

This was City’s first Champions League group defeat since September 2018, when they lost 2-1 to Lyon, a run of 18 games unbeaten.

They came into the game on a high after beating European champions and Premier League title rivals Chelsea 1-0 on Saturday.

And they had enough chances at the Parc des Princes to win about three games – most notably when Sterling and Bernardo hit the bar in the space of five seconds. Bernardo’s chance, in particular, was a sitter with an open goal about four yards out.

Guardiola’s side frequently threatened to get in behind PSG’s backline with reverse passes but it never paid off.

Mahrez was denied by Donnarumma three times, with De Bruyne forcing the Italian into two saves – and Joao Cancelo and Ruben Dias also having shots on target.

De Bruyne was lucky to even be on the pitch as he avoided a red card for standing on Gueye’s leg in a challenge.

City keeper Ederson only touched the ball 13 times, making one save. Donnarumma was involved 44 times in the game.

This result in itself is not ruinous for City, with teams able to afford losing a Champions League game so long as they win most of their others.

But will it dent their morale? We should find out on Sunday as they go to Anfield to face Liverpool.