Ring Ratings Update: Oleksandr Usyk jumps to No. 1 heavyweight, No. 2 pound for pound 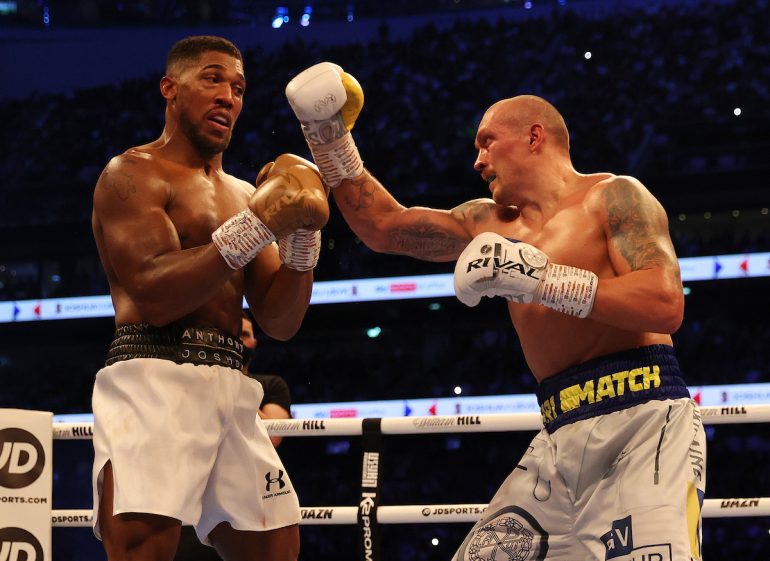 Oleksandr Usyk’s clear-cut unanimous decision over Anthony Joshua was so impressive The Ring Ratings Panel not only installed the former undisputed cruiserweight king as the magazine’s No. 1-rated heavyweight, behind only Ring/WBC champ Tyson Fury, but also debated having the new unified WBA/IBF/WBO titleholder unseat Canelo Alvarez in atop the pound-for-pound rankings.

Usyk (19-0, 13 KOs), who was previously No. 4 in Ring’s pound-for-pound rankings, beat Joshua by scores of 117-112, 116-112 and 115-113 in front of nearly 70,000 fans at Tottenham Hotspur Stadium outside London on Saturday. It was the masterful Ukrainian southpaw’s 10th consecutive “on-the-road” victory beginning with his first world title win vs. then-unbeaten Krzysztof Glowacki in Poland in 2016. Eight of those bouts took place in the home country of Usyk’s opponent, which only makes his considerable accomplishments more impressive.

Usyk lets it all hang out in the final seconds of Round 12, pinning an exhausted Joshua to the ropes. Picture by Ian Walton Matchroom Boxing

“The P4P top spot is between Canelo and Usyk right now,” Montero said. “I give the edge to Usyk; here’s why:

“I don’t know if the panel will agree with me or not, but I feel that Ukrainian’s win over Joshua outweighs Canelo’s entire super middleweight run. Usyk is the finest technician in the sport and did something truly historic last night in London.

“In an era where many boxers hardly face an opponent with a winning record in their first 19 pro bouts, Usyk has done the following:

“Then there’s the 335-15 amateur record, gold medals at the 2012 Olympics and numerous other international tournaments, and an undefeated run in the World Series of Boxing (including a win over our current No. 9 heavyweight).

“FYI – he did this all on the road! No marinating, no padding, no A-side vs. B-side ‘you gotta come to my side of the street’ nonsense, no regular or interim rubbish.

“Is there a more accomplished fighter in the post-Floyd/Manny/Wlad era? I don’t think so.”

The rest of the panel noted Montero’s salient points, but the majority still backed Wainwright’s suggestion for Usyk at No. 2.

“I agree with Usyk up to No. 2, for sure, given he has cleaned out one division and on his way to doing so in a second one now,” said Martin Mulcahey. “Really appreciate that he makes no excuses, never makes demands (unlike our current No. 1) and just shows up in opponents’ back yards to kick their asses. Extra credit for all those road victories from me, that puts him past Inoue who is more explosive and fun. Feel bad for (Terence) Crawford but based purely on results (activity and facing the best are part of the metric) poor Bud cannot keep up in this race with the elite who are navigating promotional hurdles.

“I like Montero’s arguments for Usyk as No. 1 and also can’t forget that IMO Canelo lost to GGG at least once. Basically, Usyk is the Hagler of this era, while Canelo is the flashier Ray Leonard… so it kinda depends on what divide line of that argument you prefer. I am on the Halger/Usyk side, he has done everything a fan can ask of him without the stain of tainted meat or need to embarrass the sport at press conferences.”

Most of the panel still view Canelo as the P4P King but acknowledge that Usyk is getting very close to that lofty status. Photo by Michelle Farsi/Matchroom.

“I remember catching a glimpse of his second or third fight on an undercard and thinking ‘this guy will be a superstar one day, especially if he gets rid of that ridiculous ponytail.’ I was right on all counts!” continued Morilla. “I still think Canelo has a slight edge over him, especially in terms of how he has proven himself over a longer period of time. Also, Canelo’s lack of amateur background shouldn’t count against him in this head-to-head comparison… and they will have plenty of opportunities to make their respective cases for improvement in the near future. And finally, we (the boxing world, not just us…) have been known for rushing a Ukrainian to the top before we had enough evidence of their professional potential, and that didn’t really go so well. I still think Usyk is only a couple of fights away from becoming the best Ukrainian fighter ever and a top-five southpaw in the all-time list, but I don’t mind waiting for those fights. For now, then, Canelo at No. 1 and Usyk at No. 2 seems the right move.”

Added Daisuke Sugiura: “I still take Canelo over Usyk as of now because of the overall quality of of Alvarez’s opposition and his consistency, but I agree that Usyk is ahead of Inoue and Crawford, and also agree that what he is doing is truly insane and historic. Doing this all on the road, usually as the B-side, is the most amazing part to me. Don’t really know if anyone has ever done something like this before.”

Managing Editor Tom Gray had the final word on the pound-for-pound rankings update:

“Canelo has the smallest of edges over Usyk – just based on how long he’s campaigned at the elite level and his own accomplishments – but it’s VERY close.

“As much as Joshua had his moments in that fight, he was largely dominated. OK, Usyk sustained some facial damage but look at what he was up against. Joshua is an absolute monster and had a bunch of serious physical advantages. And, by the way, Usyk looked like he could have gone 15-20 rounds when the final bell rang.

“In terms of history, I believe Usyk’s cruiser to heavyweight jump is the most impressive ever. Douglas barely trained for Holyfield and was a Cinderella story, and while Haye overcame huge disadvantages to beat Valuev, that win doesn’t beat this one. Usyk took down a unified champion with more wins over Ring-rated heavyweights than anyone else out there. I’m not saying Joshua is flawless, but he’s an excellent fighter and Usyk beat him convincingly.”

RING RATINGS UPDATE (as of September 25):

Pound for Pound – Oleksandr Usyk advances to No. 2.

Anthony Joshua had his moments vs. Usyk. Picture by Mark Robinson Matchroom Boxing

Heavyweight – Usyk advances to No. 1 following his unanimous decision over Anthony Joshua, who drops to No. 2.

“Lost in the great Usyk performance is that Joshua did have some good moments before faltering in the home stretch,” Mulcahey said. “So, Usyk to No. 1 for me and AJ just behind at No. 2. Does Wilder have an argument to be No. 2? Yes, he does but I believe Wilder should have two losses on his resume as well and I appreciate AJ not making excuses, saying he lost to better man and not blaming anything and everything around him. So, if No. 2 spot is evenly contested, I give it him on that, and also factor in that AJ did adjust and avenge a loss whereas I have yet to see that from Wilder.”

“Although Smith has no real body of fights at 175, he looks the goods at the new weight and would have no issue with him coming in at No. 10,” Wainwright said.

Adam Abramowitz had a slight issue with it, “I wouldn’t rank Callum Smith at light heavyweight just yet, although a very good start.” Mulcahey and Grey agreed, but they were overruled by Morilla and Yours Truly.

“Christian Mbilli stopped Ronny Landaeta in three rounds,” Wainwright said. “Excellent win over an opponent who hadn’t previously been stopped. With a new space opening up, I would have Mbilli coming in at No. 10.”

Junior flyweight – Masamichi Yabuki advances from No. 10 to No. 3 after his stunning upset 10th-round stoppage of No. 1-rated Kenshiro Teraji, who drops to No. 4.

KEEP AN EYE ON (according to Anson and Martin):

Be on the lookout for Arslanbek Makhmudov.

“One to keep an eye on, a dangerman for sure,” said Wainwright.

Added Mulcahey: “Makhmudov has real potential, and beating (german gatekeeper) Erkan Teper is a solid if not deciding win for top-10 entrance.”