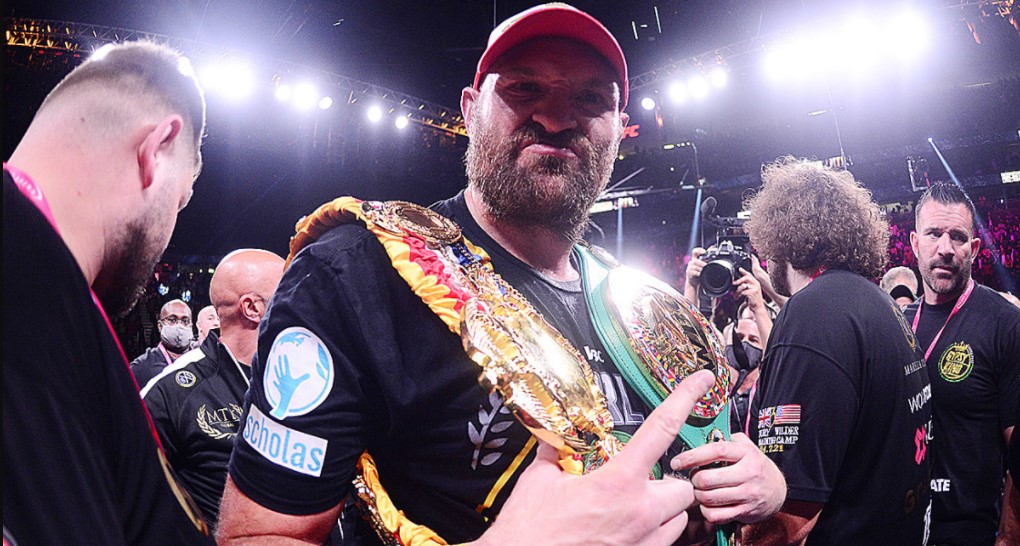 Tyson Fury reaffirmed his status as the heavyweight number one in emphatic fashion on Saturday night in Las Vegas.

There were scarcely any British fans to witness the carnage at the T-Mobile Arena, but Fury v Wilder III will go down as one of the greatest, most thrilling encounters in boxing history.

“I believe I beat any man in history,” was Fury’s verdict, and it is hard to see who could beat the Gypsy King after another jaw-dropping performance made iconic by the guts and glory of the WBC champion.

After finally closing the door on his trilogy with Wilder, it leaves fans asking what is next for Fury?

‘I am going to bask in my victory’

Fury, 33, was evasive about his plans in the post-fight news conference, refusing to say who he wanted to face next.

“Before I start thinking about other men I am going to bask in my victory,” he said. His co-promoters Bob Arum and Frank Warren were equally cautious about saying too much.

There are multiple options for Fury. He can chase an undisputed fight with Oleksandr Usyk or wait to see how the WBO, WBA (Super) and IBF champion’s rematch with Anthony Joshua pans out.

There is also the issue of a WBC challenger with fellow Briton Dillian Whyte taking on Otto Wallin later this month. Fury will be ordered by the WBC to fight the winner of that meeting straight away if a unification bout cannot be arranged.

A mandatory defence is likely to be Fury’s next fight.

British fans would love to see Whyte go toe-to-toe with Fury, but the Bodysnatcher has to get past Wallin first and has fallen victim to derailing losses before, such as last year’s defeat by Alexander Povetkin.

Three years have passed since Fury fought on home soil, but his US promoters Top Rank will surely be agreeable to a fight with Whyte in the UK early next year. If Wallin wins, Matchroom boss Eddie Hearn confirmed there is a rematch clause for Whyte – which would further complicate matters.

Warren said before the fight he expected Fury’s next fight to be a homecoming.

After the victory he told BBC Sport: “I don’t know what [the WBC] are going to do but there’s no rush because he needs some time out now and whatever he wants to do is what we’ll do.”

It has been Joshua’s catchphrase, but it appears the only thing we know for sure is if there is to be that elusive undisputed fight, one half of it will be Fury.

Fury’s team has already floated the idea to Joshua of stepping aside, but the British heavyweight flatly turned down the proposal. Joshua has activated the rematch clause and as much as people will be desperate to see Fury given a chance to hold all the belts, it is unlikely to be the next step.

“Maybe we can make the winner of that fight,” Warren said of Usyk v Joshua II.

“Autumn, maybe this time next year. They are talking about putting that fight on some time in March, so they’ll need six months after that, so that’s when it would happen.

“It’d be an ideal world for Anthony Joshua not to go for the rematch so we can just get straight to it.”

Team Fury might like Joshua to step aside, but should he bounce back to become a three-time world champion, the all-British fight with Fury will be back on.

While Fury was tight lipped about his next move, there will be serious questions asked about Wilder’s future. The American will undoubtedly feel devastated to have floored his bitter rival twice in one round – four times in three fights – and still end up on the losing side.

Wilder’s power shone through just as it did in the first fight, but once again Fury was equal to the challenge.

“I did my best, but it wasn’t good enough,” Wilder said. “I’m not sure what happened. I know that in training he did certain things, and I also knew that he didn’t come in at 277 to be a ballet dancer. He came to lean on me, try to rough me up and he succeeded.”

Wilder was required to rebuild his confidence after such a one-sided defeat 20 months ago. That confidence appeared fragile given it was built on bizarre excuses and surely said bravado is now shattered after Fury delivered another knockout.

Until Fury came along Wilder had the perfect record in 40 fights and appeared unstoppable.

“I’ve always said I’m the best in the world and he’s the second best,” Fury said in the ring after the fight.

Many will agree with Fury, Wilder showed in the third fight he is capable of making adjustments. But it remains to be seen if the usually super confident Wilder can deal with being number two.

He reigned for five years as WBC champion and while it seems unlikely he could reclaim that belt while Fury is active, there are plenty of fights for Wilder to take on.

The heavyweight landscape can change in a second and Usyk’s victory over Joshua blew the division wide open. It has been a balancing act for Joshua to keep three of the world titles in his hands and should he be unable to win them back and an undisputed fight cannot be arranged, it is not inconceivable that the belts could scatter across the division.

But Wilder turns 36 in October. He has now taken serious punishment in back-to-back fights, suffering two knockouts. Is retirement the wise thing to do? Despite Fury’s taunts, Wilder’s legacy is not in tatters. He twice got as close to anyone could have imagined to beating Fury. A dangerous, unique puncher came up just short against what many will consider the era’s best.

Until Wilder speaks, Fury has the last word on his rival.