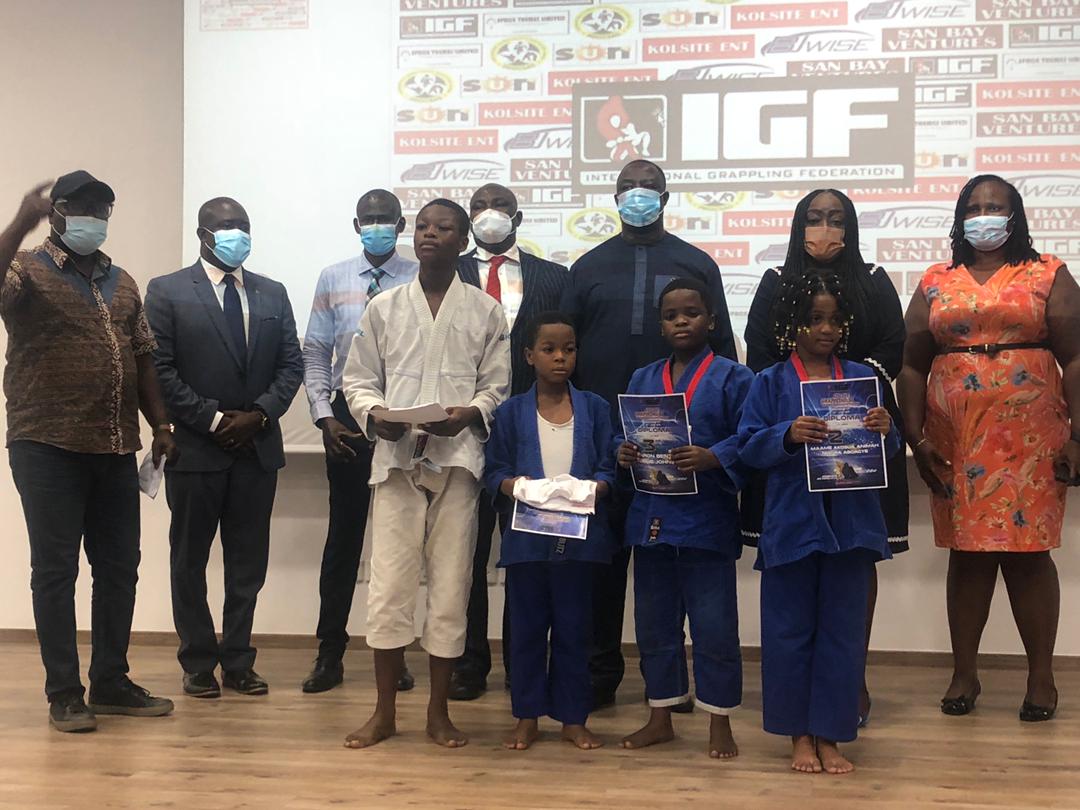 Mr. Lawrence Agyinsam, CEO of Export and Import Bank Ghana (Exim Bank) has urged corporate Ghana to support the least financed sporting disciplines in this country because they have proven to be more successful in international competitions compared to other highly financed and supported disciplines.

Mr. Agyinsam made the call on Tuesday evening when his company hosted a number of athletes of the Professional Combat Sports Association of Ghana (PROCSAG) who presented some medals and certificates won for excelling in an international virtual ju jutsu tournament back in May.

Mr. Agyinsam presents certificate to one of the beneficiaries

Three boys namely Zoe Amoonu Bernie-Johnson,12 year old, Aaron Bentwum Bernie-Johnson, 10 and six year old Leon Afrim Bernie-Johnson, all students of Hope of Glory Montessori School, Mamprobi, Accra as well as a girl, 6 year old pupil of Day Spring Montessori International School, Dansoman, Accra, Maame Akosua Amina Nhyira Aboagye then engaged in a few demonstrations of the art of grappling which neither involves kicking nor knocking an opponent but largely a self-defence sport, much to the admiration of their chief host.

“When I was approached about this a week ago, I was thinking we were going to see relatively old men or women but I’ve been highly impressed with what we just witnessed these very young people demonstrate. I’m especially excited with the girl’s participation because it could pretty much help, they could fight with armed robbers and predators considering the kind of men we have today some of who are abusing their own daughters,” Mr. Agyinsam said.

The four kids who engaged in grappling demonstrations show off their virtual grappling tournament certificates with the mum of the only girl, Maame Akosua Amina Nhyira Aboagye

“This certainly is a sport we must encourage and support because first it is a form of self-defence and secondly, to make sure that they go out there and shine on the world stage. We will donate a cash of twenty thousand Ghana Cedis (GH¢20,000) to serve as an example for other corporate bodies to also come on board,” the Exim Bank boss stated.

“I want to also use this opportunity to invite like-minded organisations to support this sport for them to take Ghana unto the international stage where they have already won medals even virtually. It’s certainly the sport for the future, unlike the famous ones like football we keep pumping a lot of money in but never winning anything,” Mr. Agyinsam added.

On her part, Shakiratu Larteef, President of Ghana Combat Ju Jutsu, expressed utmost gratitude to Exim Bank for their vote of confidence in the association which motivated them to come to the aid of Combat Ju Jutsu and pledged that the athletes and officials will work harder to make the sport even more successful in Ghana.

“We thank Exim Bank so much for this support and absolute show of faith in what we are doing, we hope this is the beginning of a very healthy and long lasting relationship. This definitely is the motivation we need from corporate Ghana and I can assure you we will nurture more athletes and achieve much more internationally going forward,” Ms. Larteef said.

“We took these children through a virtual competition which was run from Lithuania for 32 countries, only Ghana, Congo and Egypt were from Africa and the children did very well, all winning medals, some of which we present to you here today,” she added.

Madam Shakiratu Larteef continued: “This is a sport for all age groups, we don’t punch, we don’t kick, we just use technique to outwit an opponent. It’s very friendly and mostly self-defence and I encourage all of us to come and learn because if you remember the sad death of American George Floyd when he was down with the Police Officer holding him down, we can all use self-defence in that position.”