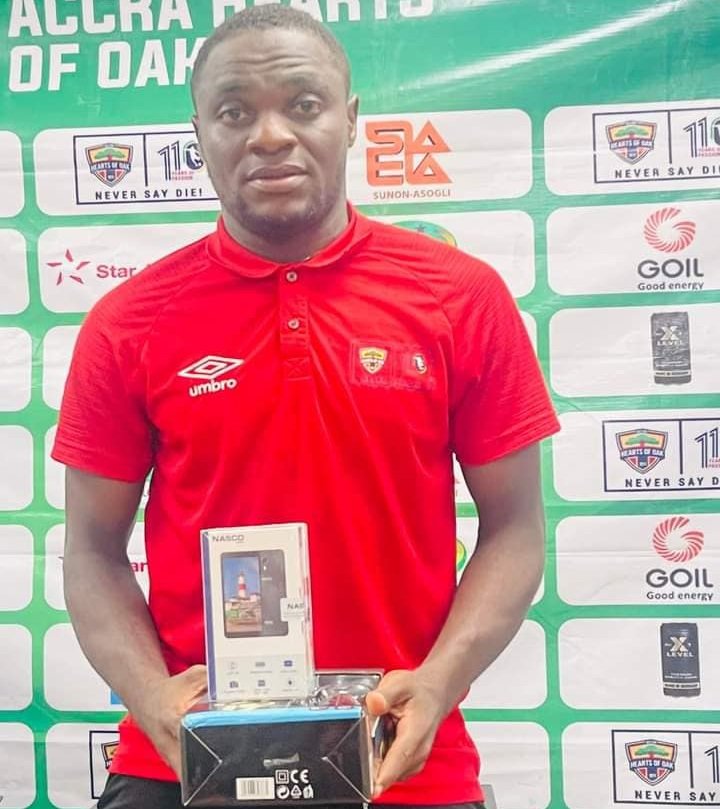 Ghanaian-based football agent Oscar Mawuli Nuwati recounted how a staunch Hearts of Oak fan has placed Dennis Korsah on his company’s payroll following his magnificent performance in the goalless drawn game against Asante Kotoko in the Super Clash on Sunday.

Korsah joined the Phobians on a two-year deal from second-tier outfit Ebusua Dwarfs in the second stanza of the Ghanaian transfer window.

The 25-year-old had some big boots to fill in following the departure of Raddy Ovouka – whom many believe was the best left-back in the top-flight league prior leaving to Hearts of Oak to join US League Championship side New Mexico United.

However, Korsah has adequately fill in the void left by the Congo international after his sumptuous display against Real Tamale United and Asante Kotoko.

It was in the latter match that the bulky-left back showcased his talent to the country – bagging the Most Valuable Player gong after the game.

Following his talked-about display, football intermediary Oscar Nuwati recounted how a die-hard fan of the club rewarded Korsah’s performance in the encounter against their bitterest adversaries Asante Kotoko.

“The super clash can Make or unmake You,” said Nuwati.

“I have always been telling the players I work with that, playing for the two giants in the Ghana Premier League comes with a lot of responsibilities and if you are disciplined enough to excel in any of their colors, the benefit that comes with it is enormous.”

“I remember when I went to the Accra Sports Stadium to witness the match between Accra Hearts of Oak and Kumasi King Faisal together with Dennis Korsah leading to his move to the defending champions, we met a couple of people who were skeptical about him signing for Accra Hearts of Oak and not only were they unsure of what he will bring to the club but if he’d be able to fit in perfectly,” he continued.

“We met this public figure (Business Tycoon) who happens to be a staunch supporter of the Phobians in the VVIP Stand (who’s name I cannot mention) at halftime, he took us downstairs, bought us snacks, and of course the traditional goat meat that every football fan enjoy at the stadium.”