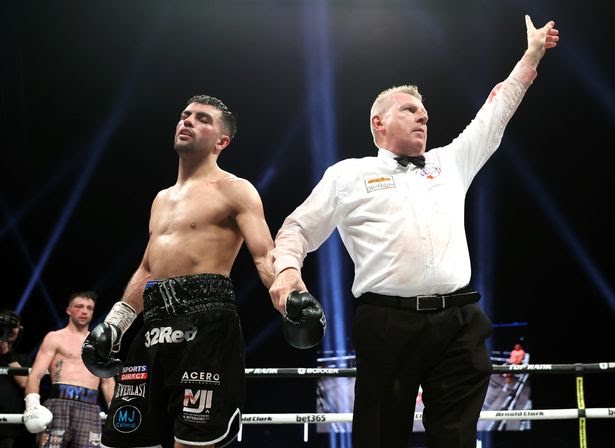 Boxing fans were united in fury on Saturday night after Josh Taylor was handed a hugely controversial win over Jack Catterall in Glasgow.

Taylor was dropped to the canvas in the eighth round of the world light-welterweight title fight, but still retained his WBA, WBC, IBF and WBO belts in a split decision.

“I thought I started a little slow but once I got into my rhythm I got him with bigger shots,” he told Sky Sports.

“He was trying to spoil a lot, going down a lot, he caught me with a couple of good ones I won’t lie.

“It wasn’t my best performance, I put a lot of pressure on myself with this being my big homecoming fight.

He added: “Overall I scored the bigger and better shots, so I know I won. He put up a good fight that’s for sure, but he never won the fight”

However, Catterall’s trainer Jamie Moore had a very different opinion – and one which reflected the prevailing mood on social media.

“It’s difficult to put into words,” he told Sky Sports. “You’re talking about a kid that’s worked all his life to wait for that moment.

“He stepped aside to allow Taylor to become unified champion. He performs like that, beats the champion in his own back yard and gets robbed.

“My son is 16, just getting into boxing, he will be thinking: ‘Why should I?’

“It’s disgusting. I don’t know what to say. You’ve asked Jack to come down and speak, as if he can do that, he’s heartbroken.”

Catterall’s loss did not go down well online, with British heavyweight Dillian Whyte summing up the mood with one word: “Disgusting.”

Former England striker Michael Owen tweeted: “Boxing is such a great sport but decisions like that are a disgrace and call into question the integrity of the game. #TaylorCatterall”

“What an absolute disgrace. A robbery of the highest proportions. Gutted for Jack Catterall,” wrote one fan.

“That’s a disgrace. Done with boxing,” added another.

“Makes a mockery of boxing at the highest level. Absolute disgrace. He’s been battered and the poor blokes lost. Respect will be lost with the sport,” said another.

“Worst decision in boxing history and for Taylor walking around saying he won is very embarrassing. What a disgrace. This one has stained the sport I’m afraid,” wrote one disgruntled viewer.

Another added: “Cannot believe it. That is a shameful decision. Unless the rules of boxing have changed and you now score points by being hit instead of hitting then I do not see how Taylor won even 3 or 4 rounds, never mind the whole fight.”

Even the fight promoter, BOXXER’s Ben Shalom, admitted to being “embarrassed” by how the contest had panned out.