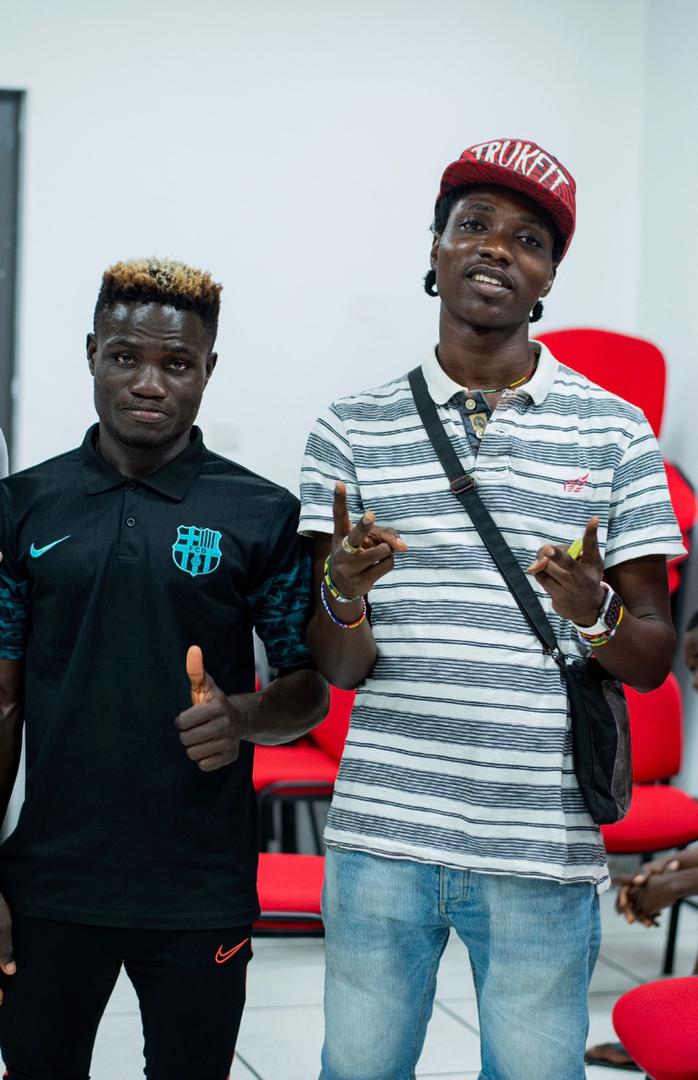 John Quaye with his manager, Yusif as he gets ready to fight Yusif Nanor on Saturday

In the bustling slum suburbs of Accra somewhere in James Town, a boy poised to escape the hard life began his journey as a footballer. Little did enterprising John Quaye know that, that quest would eventually land him in the squared circle and under the bright lights.

Born to Attah Tei and Maa Bia, both fisher folk, young Quaye became fascinated by the artistry exhibited by boxers who featured in regular contests organised in the communities. He thus approached Coach Zico of the Sea View Boxing Gymnasium and also Coach Gaddafi of the Charles Quartey Boxing Foundation who were the ones in charge of these community exhibitions. Coaches Randy and Nunoo also helped shape and develop him.

After learning rudiments of the ‘Sweet Science,’ as boxing is called, Quaye’s debut came beckoning. Christened Thomas Nartey, his then handlers insisted he take on the ring name John Quaye with the undesirable task of helping tagged prospects improve their records and making them look good in the ring.

Having no manager, no means of livelihood and with a desire to have his part of the pugilistic cake, John Quaye accepted this ignominious role, albeit he executed his task with such glee, verve and flashes of brilliance that many industry players inexorably took note of him.

His break came when the current President of the Ghana Boxing Authority, Mr Abraham Kotei Neequaye watched him at an event at the La-Palm Royal Beach Hotel and pointed out to him that he should get serious with his craft since he had the potential to excel.

Quaye took the GBA President’s rede in good faith and silently put in the work. The results were evident on fight night 1 of the now De-Luxy Professional Boxing League where John wowed fight fans with copious display of tremendous skill and antics that simply mesmerized and bamboozled his opponent, Stephen Addy.

In the end John won by a shut out. Fans applauded the new sensation; a 22 year old with the boxing IQ of a veteran and an agility befitting his age. With Pernell ‘Sweet Pea’ Whitaker as his idol, the young featherweight nicknamed ‘Magic Man’ stormed the Bukom Boxing Arena on fight night 2 brimming with confidence as he blasted Denjie Sangote in just two rounds.

Now with a record of 2-4-1, the hot sensation has opened a fresh chapter in his career since meeting new manager, Mubarak Yusif Nii Armah Nanor, who is working on strategically positioning the boxer to annex the Ghana national championship and ultimately aim for the world title itself.

The ever smiling pugilist admires the exploits of Emmanuel Tagoe AKA Game Boy and enjoys listening to hiplife artiste , Fameye.

John is billed to compete on fight night 3 against Yusif Nanor and has promised nothing short of victory.

And of course, the humble lad, ‘Magic Man’ John Quaye cannot let down his guard.