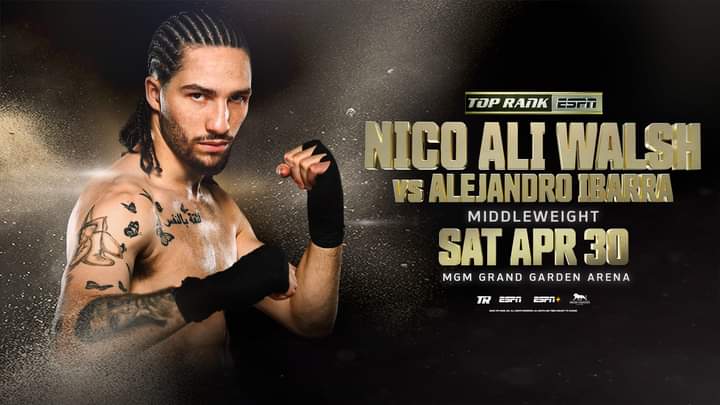 Ali Walsh said, “Las Vegas is home, and the MGM Grand Garden Arena has hosted so many legendary fights. This is a dream come true. I’ve gotten to know Oscar and Shakur, and it’s an honor to fight on their card. I’m focused on my fight, as Ibarra is a capable veteran. He wants to be the guy to knock off Muhammad Ali’s grandson. I won’t let that happen, especially in front of my family and friends.”

Ali Walsh (4-0, 3 KOs) graduated from Las Vegas’ Bishop Gorman High School and is currently a student at UNLV, where he is on track to graduate later this month with a degree in business entrepreneurship. He turned pro last August with a headline-grabbing first-round knockout. Ali Walsh fought twice more in 2021, including a four-round decision over Reyes Sanchez at Madison Square Garden, the site of many of his grandfather’s most memorable ring battles. Ali Walsh last fought in January in Tulsa, Oklahoma, where he knocked out Jeremiah Yaegar in two rounds. He now turns to Ibarra (7-1, 2 KOs), a 28-year-old who has won four straight since the lone loss on his ledger.

Promoted by Top Rank, tickets are on sale now and can be purchased by visiting AXS.com.