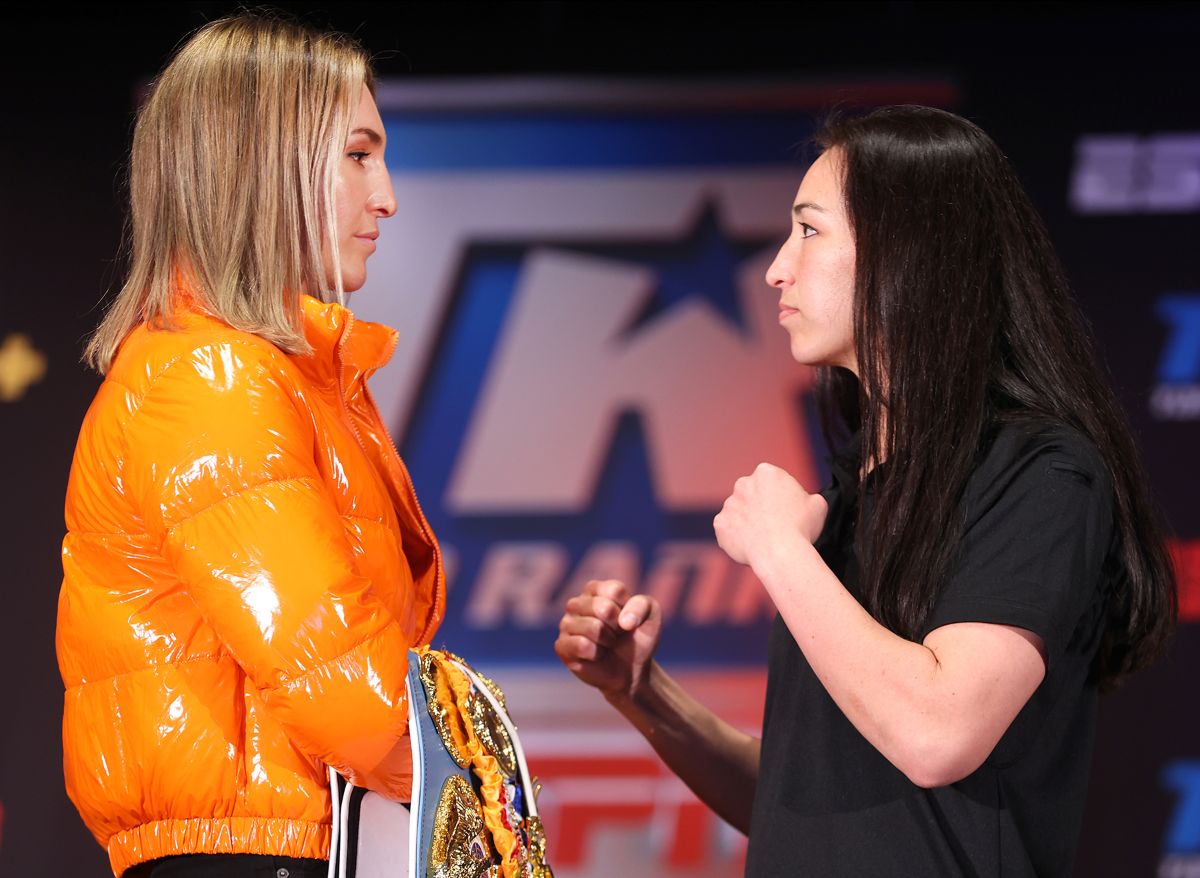 WBO/IBF junior lightweight world champion Mikaela Mayer, the Southern California native who is now one of the sport’s top pound-for-pound talents, is ready for her home region title defense.

At the press conference, it was announced that Mayer inked a multi-year contract extension with Top Rank. Mayer signed with Top Rank after representing the U.S. at the 2016 Rio Olympics.

In the 10-round co-feature, welterweight contender and San Diego native Giovani Santillan will battle Jeovanis Barraza. The ESPN telecast will open with former world champion Andrew Moloney versus Gilberto Mendoza in an eight-round junior bantamweight tilt.

“Ever since I walked into a gym 14 years ago, I’ve been fighting for a place for women in the sport and to prove that we are a powerful force in the sport of boxing. This contract solidifies that. I’ve completed that goal to an extent. Obviously, there is a long way to go with creating equality in the sport and closing that gap, but I couldn’t be happier with this contract. It’s a dream contract. It’s a contract I have been fighting for all these years, and I wouldn’t want to do it with anyone else but Top Rank.”

“I haven’t fought in LA in a long time. It’s kind of come full circle. I started here 14 years ago when I was 17. And I left at 19 years old with a dream: to become an Olympian and become one of the best female fighters in the world. Fourteen years later, I’m here fighting in the main event on ESPN. I’ve come a long way.”

“I’ve known Jennifer for a long time. In one of my first amateur tournaments, she was there cornering for her sister. She was around, and she had already been in the game. She’s been in this game for a really long time. She comes from a family of fighters, so it’s in her blood. She just went 10 rounds against the 135-pound undisputed champion, Katie Taylor, so I have tons of respect for her. I know she has experience and has trained hard, and we didn’t look past her at all in preparing for this fight.”

“It’s no secret that I wanted to continue to unify. I wanted Alycia Baumgardner. I wanted Hyun Mi Choi. That was my first choice. They’re not quite ready to step up to that, I guess, so we had to look at another direction.”

“We wanted to fight someone who is strong and proven. We don’t want any easy fights. We want to continue growing and getting better. Jennifer Han had just come off a strong fight against Katie Taylor, and we thought that would be a good matchup for now. We trained hard for her. We know that she had just given birth going into the fight with Katie Taylor and she still did what she did, but we expect her to be even sharping coming into this fight.”

“I’ve been in boxing for over 20 years. I’ve worked my entire life for these kinds of opportunities. When I first started boxing, I didn’t think these things would happen. I didn’t think I’d be headlining on ESPN. This is amazing. I am very, very grateful.”

“This is huge. When I first started boxing, we were working hard just to get put on television. During my championship reign, I never got televised, and it was very frustrating. Women’s boxing has grown a lot. And I’m very excited to finally be on TV to showcase our talent.”

“The Katie Taylor fight was quite an experience. It was right after I had my second child, so I had quite the obstacle of losing weight, which is not fun. But it’s OK. It’s part of boxing, and she wouldn’t have called me if I was ready. I have no regrets. It was a great experience for me, but that was not my best performance.”

“I like fighting in Southern California. It was great to have been able to fight in San Diego, my hometown. I think that San Diego has a lot of boxing fans, and to have a show out there is great for everybody. To be in the co-main event of that show was amazing. Now we’re in Costa Mesa, which is only an hour away from San Diego. I expect a lot of fans, friends and family to be there.”

“I’m ready for a title shot. I think I’m there. We definitely want the big fights. Hopefully, this year we get closer to something like that. Hopefully, we can be the main event in San Diego. This Saturday night will be important for me because it will set the tone for what I’m going to do for the rest of the year.”

“With every fight, there is always pressure. You always have to perform as a fighter, especially fighting on ESPN. You always want to do your best. I think I’m undefeated for a reason. We’re always thinking about trying to get the bigger fights. I’m always working hard because I want to give the best version of myself in each fight.”

“I feel great. I first have to defeat my first opponent, which is the scale, and then I’ll just wait for Saturday. I had a great training camp. I corrected things in sparring every day. That’s what this sport is about. You have to be correcting things every day.”

“In this fight, the important thing is to be able to deal with different styles. Depending on the opponent, you have to change your style. That’s what I’m planning to do.”

“I feel like this weekend is my opportunity to redeem myself and show that I’m a much better fighter than what you saw in those two losses to Joshua Franco. I learned a lot from that trilogy. Over the last seven or eight months, I have been working extremely hard to improve as a fighter.”

“I really feel like I’ve done that. I’ve shown it in the way I’ve been performing in the gym and in sparring. I really feel now like I can beat any super flyweight in the world. My plan now is to go out there Saturday night, put on the best performance of my career and earn my opportunity to again fight for a world title and ultimately become world champion again.”

“There are so many good fights out there in the super flyweight division. I just want to prove that I belong at the top of that division. I would love the opportunity to fight any of the world champions right now. I truly believe that I can beat any one of those guys, but that all starts this Saturday night.”

“It’s great to be back over here. This really does feel like our second home now. It’s been seven months since my last fight. I’ve been working hard every day, and I’m ready to put on a really impressive performance.”

“It’s time for us to get the ball rolling. We plan on finishing this year with two world titles around our waist. And as Andrew said, that all starts this Saturday night by getting two wins and moving forward.”

“There is always pressure. I’ve got some big plans for this year. But, firstly, this man Pedroza is in my way. He wants to take away everything that I’ve worked for. So, I can’t let that happen. I’ve got to go out there and get the job done.”

“I’m very excited. I’ve been waiting for this for a long time. Initially, I was planning on going pro after the 2016 Olympics, but I didn’t qualify in my weight class. And I’d always wanted to be an Olympian. So, I just had to go for that dream first and go another round. I made it, and I competed in Tokyo. Now I’m here, and I’m excited.”

“I want to get a world title fight as soon as I can and show the world what I can do. I definitely think that I have more of a professional style. I like to go longer rounds. I like to take my time. Now, I get to take my time, sit down on my shots and get some knockouts in. You’ll see my experience in the ring.”