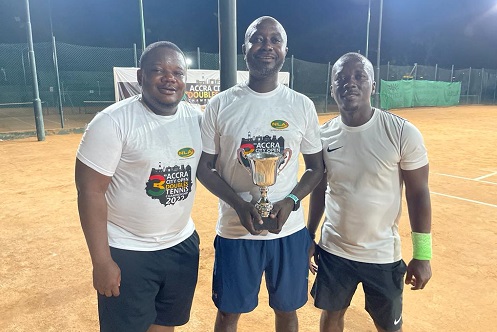 It was an incredible show of class at the Accra Lawn Tennis club as Johnson Acquah teamed up with Ronald Lawer to beat Reginald Okantey and Derick Ominde in the men’s Professionals of the Accra City Open Doubles tournament last Monday.

Obviously, it was the game most people were looking for to and right from the start the duo maintained their composure forcing Okantey and Ominde to make mistakes until they finished the first set 6-2.

The expectation was for them to bounce back stronger in the second set but Acquah and Lawer gave them very little room to operate as they finished the second set 6-2 to win the Professionals Doubles game.

But before this thriller, the semi-Professionals also dazzled in another entertaining game with Thomas Amoako Boafo and Robert Kpodo fighting from behind to clinch the ultimate after beating the pair of Andrew Adu-Appiah and Clement Alisi 3-6, 6-1, 10-5.

In the Mixed Doubles game Reto Denis Wicki and Precious Nunana were brilliant as the dispatched Nana K. Sam-Awortwi and Faustina Tagoe 6-3, 7-6(1) while Precious was on the winning side again when she teame up with Kate Coleman to beat Eugenia Asigri and Afia Oforiwaa 6-0, 4-6, 12-10 in the Ladies Double game.

In the Men’s 30-39 age category Ismaila Lamptey and Bernard Nii Bortey beat Nana K Sam-Awortwi and George Heckson 6-1, 3-6, 10-5, Alfred Okang and Yaw Akotuah beat David Carreras and Laurent Piat 4-6, 7-5, 10-4 in the Men’s 40-49 age category, while the combination of Godwin Ayinduah and Michael Amoako proved too strong for George Mills and Phillip Mensah who lost 6-2, 6-1 in the men’s 50-59 category.