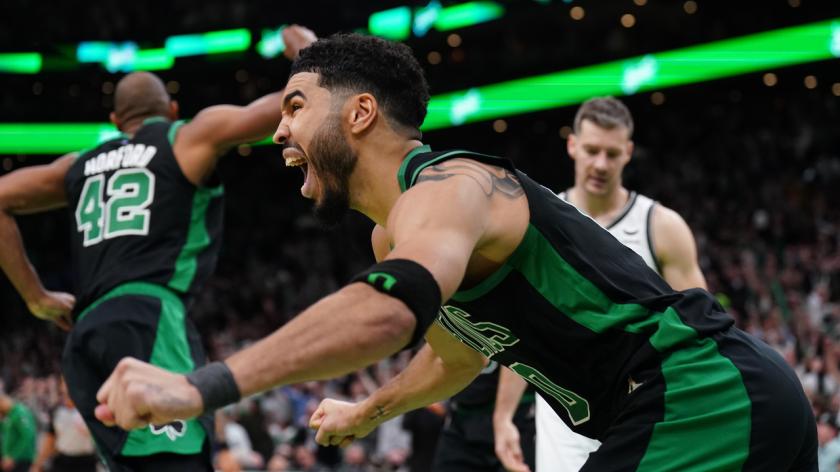 What a time for your first career buzzer-beater.

Jayson Tatum’s ascension into the ranks of the NBA’s elite took yet another step forward on Easter Sunday, when he delivered a dagger straight through the heart of the Brooklyn Nets with a game-winning 360 layup as time expired at TD Garden, giving the Boston Celtics a 115-114 win in Game 1 of the Eastern Conference quarterfinals.

It was somehow Tatum’s first buzzer-beater in his five-year NBA career, and the first for the Celtics in the postseason since 2010, when Paul Pierce came through in the Eastern Conference quarterfinals against the Miami Heat.

The winning bucket capped a solid all-around showing from Tatum, who finished with a team-high 31 points (9 for 18 shooting, 3 for 7 from 3-point range) along with eight assists, four rebounds, two blocks and a steal.

Not to be overlooked in Tatum’s heroics: Marcus Smart deferring to Tatum for the look at the buzzer. How many times through the years has Smart opted to take that shot in a similar situation? Not that a generic mid-December game against the Sacramento Kings carries the same weight as a postseason contest against Kyrie Irving and Kevin Durant, but that might be the best part of the play from the Celtics’ perspective, that Smart has abandoned his version of hero ball and is instead excelling as a facilitator on offense.

Boston will go for a 2-0 series lead over the Nets on Wednesday night at TD Garden, with tip-off scheduled for 7 p.m. on NBC Sports Boston.