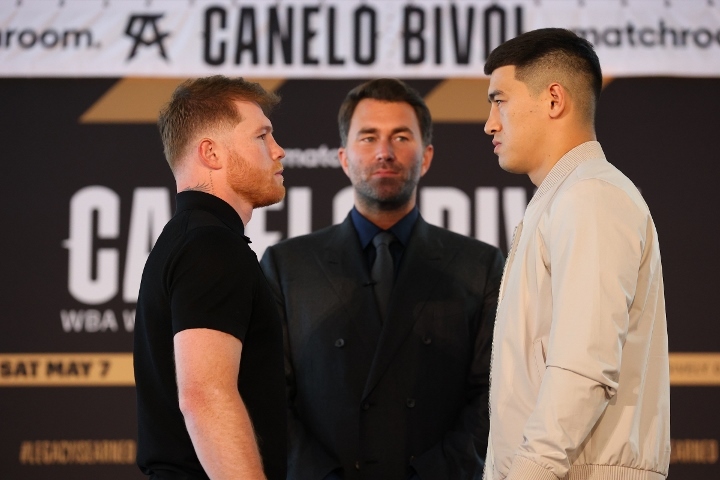 Saul ‘Canelo’ Alvarez will be among familiar faces at a venue where he has headlined more than any boxer.

The pound-for-pound king and four-division champ is set for his quest to become a two-time light heavyweight title claimant as he next faces WBA titlist Dmitry Bivol. Locally based referee Russell Mora has been assigned to officiate the scheduled 12-round DAZN Pay-Per-View main event from T-Mobile Arena in Las Vegas, where Alvarez will appear for the sixth time since the arena opened its doors in 2016.

The three judges for the bout are Tim Cheatham (Nevada), Dave ‘Not Carl’ Moretti (Nevada) and Steve Weisfeld (New Jersey), all of whom are considered among the sport’s best in that field.

All four officials have previously worked bouts involving Alvarez (57-1-2, 39KOs). In particular, the May 7 event will mark the eleventh time that Moretti has been assigned to a fight involving the global superstar from Guadalajara, Mexico, including each of Alvarez’s last eight fights in Vegas.

The May 7 fight will mark the second time that Mora has worked a fight involving Bivol. His lone other appearance involving the unbeaten titlist from Saint Petersburg, Russia came in Bivol’s Las Vegas debut when he stopped Cedric Agnew in the fourth round of a June 2017 bout on the undercard of the Andre Ward-Kovalev HBO PPV rematch at T-Mobile Arena.

Weisfeld has judged one other fight involving Bivol and four featuring Alvarez. The New Jersey-based official had Bivol ahead 109-100 at the time of his twelfth-round stoppage of Sullivan Barrera in their March 2018 title fight at Madison Square Garden Hulu Theater in New York City.

Alvarez won on the scorecards of Weisfeld (115-113) and Moretti (115-113) in his September 2018 rematch with Gennadiy Golovin. Moretti was the only judge to have Alvarez losing on any of the six cards in the two-fight series, scoring the first fight 115-113 in favor of Golovkin in their September 2018 bout.

Weisfeld and Moretti also worked Alvarez’s fights with Plant and Daniel Jacobs. Both had Alvarez winning 115-113 over Jacobs. Weisfeld (98-92) and Moretti (97-93) both had Alvarez comfortably ahead at the time of his stoppage win over Plant.

In addition to the first fight with Golovkin, Moretti was one of two judges who scred against Alvarez in his lone career defeat—a 12-round decision to Floyd Mayweather in September 2013. Moretti had the contest scored 116-112 in favor of Mayweather. He also had Alvarez ahead 115-113 in a July 2014 split decision win over Erislandy Lara.

The May 7 fight will mark the first time that Moretti will be ringside for any bout involving Bivol. The same applies to judge Cheatham, who has worked just one other fight involving Alvarez. The Las Vegas-based judge had Alvarez ahead 77-75 at the time of his eighth-round stoppage of Billy Joe Saunders in their WBA/WBC/WBO super middleweight unification bout last May 8 at AT&T Stadium in Arlington, Texas.

Alvarez will appear in Las Vegas for the fifteenth time in his stellar career. He is 12-1-1 (6KOs) in such fights, with his last two ending in stoppage after having gone to the cards in his previous four Vegas appearances.