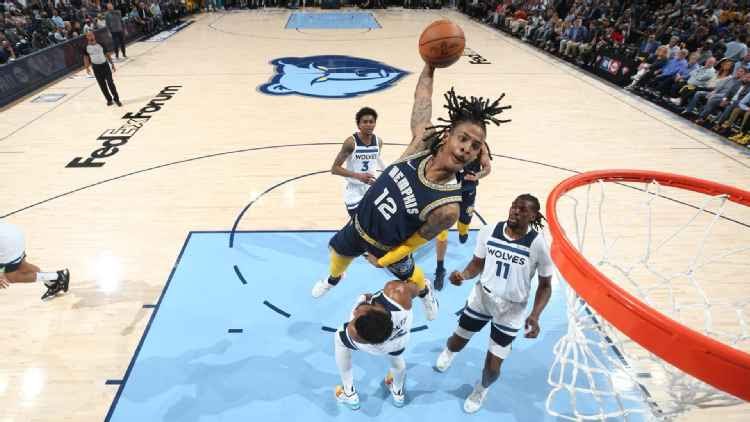 After scuffling through a frustrating first three quarters, Grizzlies guard Ja Morant exploded with a vengeance Tuesday night in one of the most compelling closing performances in recent postseason history.

Morant’s exploits fueled a fourth-quarter rally that lifted the Grizzlies to a 111-109 win over the Minnesota Timberwolves in Game 5 and a 3-2 series lead in the first round of the NBA playoffs.

The late heroics started when he elevated for an emphatic highlight dunk in the closing seconds of the third quarter over Timberwolves guard Malik Beasley, sending an electric current through the crowd at FedEx Forum. The slam trimmed the Grizzlies’ deficit to 11 points and roused Morant and his teammates from what was a miserable first 36 minutes of basketball.

“I always get the best view of his dunks,” Grizzlies big man Brandon Clarke said. “I was right there. I was like, ‘Yo, he just brought the ball all the way back and flushed it hard.’ That’s a play that can really get us going, can really get us hyped.”

Morant scored 18 points in the fourth quarter and ignited his team as the Grizzlies roared back to stage their second big comeback of the series. While the 11-point deficit was a far cry from the 21-point margin Memphis overcame in Game 3, the significance of Morant’s play has larger repercussions for a team that has been desperate for a transcendent display from its superstar.

Morant averaged 20 points, 10.8 assists, 7.8 rebounds and 3.8 turnovers, with an unexceptional true shooting percentage of 50.4, in the first four games of the series. Though he paced the Grizzlies to a win in Game 2, and leveraged the pressure exerted by Minnesota’s defense to find open teammates, he’d had a difficult time finding a balance between speed and control.

Such was the case over the first 36 minutes Tuesday night. Prior to the dunk that ended the third quarter, Morant had scored 10 points on 4-for-12 shooting from the field and only 2-for-7 from the foul line. After he missed his first three free throws of the night in the first quarter, fans at FedEx Forum unified in cheer to encourage Morant at the stripe. He subsequently sank his fourth attempt.

But in the fourth quarter — in which Morant played all 12 minutes — he staged an individual comeback and sparked a teamwide one, as the Grizzlies outscored the Timberwolves 37-24. Sixteen of Morant’s 18 points came in the game’s final six minutes.

His relentless attacks at the heart of a Minnesota defense that threw multiple bodies at him generated 10 attempts at the line in the quarter, and he converted nine of the 10. With the Grizzlies trailing by two with just over a minute remaining in the game, he drained only his fourth 3-pointer of the series in 15 attempts to give the Grizzlies a one-point lead — their first lead since the first quarter.

“He was huge,” Grizzlies coach Taylor Jenkins said, particularly in light of Morant’s earlier struggles. “He just had a smile on his face. ‘I made that shot a million times.’ I said, ‘You’re going to make the next one. Just keep shooting, keep attacking.’ This is the fun part about playoff basketball — you don’t know how you’re going to win. You just keep chipping away. Keep trusting it. And obviously, he had a brilliant fourth quarter.”

After Timberwolves wing Anthony Edwards tied the game at 109-109 with a 3-pointer, Dillon Brooks inbounded the ball for the Grizzlies. Edwards guarded Morant but gambled for a deflection on the high side of the pass, allowing Morant a runway to drive into the paint, where he led the NBA in points per game. As he met Minnesota forward Jarred Vanderbilt in the lane, Morant elevated with the basketball between his hands, before contorting clockwise and lurching toward the basket with a left-handed scoop off the glass. Morant’s acrobatics resulted in the game winner with one second remaining.

Asked to describe the play design of the final possession, Morant said only, “Go get a bucket, Ja.”

The high-stakes game between two notoriously brash, young teams was not without its pleasantries.

After hitting a shot over Morant in the fourth quarter, Minnesota guard Patrick Beverley unleashed a taunting gesture to the floor to say that Morant was “too small.” Fifteen seconds later on the ensuing possession, Morant answered with a floater over multiple defenders, then responded with his own “too small.”

As the final buzzer sounded after an unsuccessful heave by Minnesota center Karl-Anthony Towns, Morant and teammate Clarke, who scored 21 points while leading the Grizzlies in minutes, embraced. Clarke was asked what he told Morant in the celebratory moment.

“Thank God we got you,” Clarke said he told Morant. “Thank God that you’re as good as you are.”