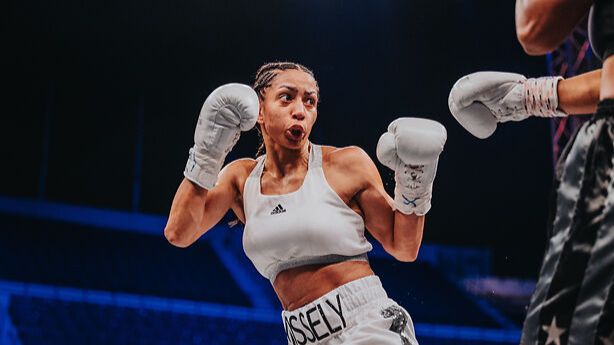 World champion Estelle Mossely is laser focused on securing a fight with the winner of this weekend’s lightweight clash between Katie Taylor and Amanda Serrano.

And while the IBO title holder believes facing Serrano would be a significant fight for women’s boxing, Mossely says meeting her old amateur rival Taylor would be even bigger.

Mossely defended her belt in Dubai last month, with a points win over Yanina del Carmen Lescano, in an absorbing contest at Probellum Evolution.

The 2016 Olympic champion, who defeated Taylor in their final contest as amateurs, is resting up as she plans her next move but will make sure to watch the action from Madison Square Garden on Saturday night as Irish hero and Serrano meet for the WBC, WBA, WBO and IBF titles.

“I will be watching the Taylor versus Serrano fight very closely this weekend, because I want to fight the winner,” said Mossely, who is 10-0 as a professional.

“She was my toughest opponent as an amateur but in our last meeting, as everyone knows, I defeated her at the World Amateur Championships, in the same year I won gold at the Olympics.”

Mossely is also targeting a return to the amateur code in time to compete at the Paris 2024 Olympic Games, in a bid to win a second gold medal.

But first, the 29-year-old wants to reach the very top of the pro ranks, which includes beating either Taylor or Serrano.

“I have been resting after defending my IBO world title in Dubai last month, but I will soon be ready to fight again,” she added.

“And I believe that after one or two more fights, I will be ready to take on Taylor or Serrano in another huge unification fight for women’s boxing.”