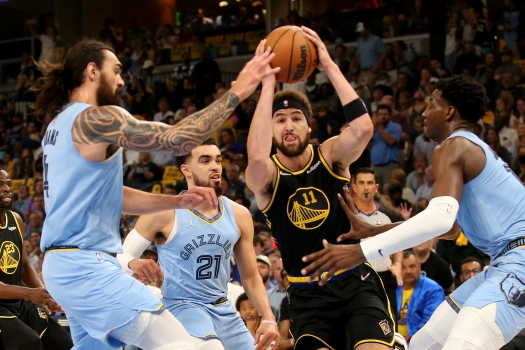 Draymond Green had a message for his teammates ahead of Game 5 of the Western Conference semifinals.

“Bring your hard hats,” Green told the team, according to acting head coach Mike Brown. “It could be ugly.”

He was right — but not in the way he intended.

It was the Warriors’ fifth-worst playoff loss ever and worst defeat since the Clippers beat them by 40 points in 2014.

“It was awful, it was embarrassing,” Klay Thompson said after the blowout loss. “From the opening tip, we didn’t have great flow and they were more aggressive than us… We all had the mindset we were going to close it out tonight but sometimes basketball is a game of accidents and we played like a shell of ourselves.”

The Warriors decided to keep the same lineup as the two previous games with rookie Jonathan Kuminga starting in place of Gary Payton II, who was injured in Game 2. That starting unit’s struggles with slow starts lingered into Game 5.

After just over five minutes in the first quarter, Kuminga was subbed out and Golden State trailed by seven.

The Warriors’ sputtering offense from the last game carried into this one. But unlike the previous contest, the Ja Morant-less Grizzlies totally took full advantage.

Memphis dominated the second quarter — and the rest of the game for that matter. Thompson hit a pair of free throws early in the second to pull within eight, but that’s the closest the Warriors got to the Grizzlies after the first quarter.

Memphis closed out the first half on a 20-4 run. Stephen Curry scored the Warriors’ only four points in the final 5:13 of the second quarter.

The Warriors made some bad decisions with the ball, which resulted in 14 turnovers in the first half. The Grizzlies, who had nine turnovers the entire game, capitalized on those mistakes, scoring 25 points off the turnovers.

And it only got worse for the Warriors from there.

The Warriors looked absolutely defeated, allowing the young and athletic Grizzlies to score all over them. Golden State trailed by as many as 55 in the second half.

The Grizzlies outscored the Warriors 42-17 in the third quarter. That 25-point losing margin is the second-biggest in a single quarter in franchise playoff history, with the Lakers outscoring Golden State by 26 points in a quarter during a 1987 postseason game.

“We just have to be more conscious of taking care of the ball,” Brown said. “We have to — have to settle down on the offensive end of the floor… because if you have turnovers like we did tonight especially early on, it kind of snowballs, and it gets them out in trnasition, and it gives them confidence, and it kind of deflates us a little bit as the game goes on.”

Thompson led the Warriors in scoring with 19 points, 12 of which came in the opening quarter. Curry had 14 and four assists. He and Draymond Green were subbed out for good with more than six minutes left in the third quarter. Thompson followed shortly after.

Curry said “everything” was disappointing about Wednesday’s performance.

“They came out with a sense of urgency and our game plan in temrs of how we know we can beat this team and things we can focus on, we did everything wrong in turnovers, offensive rebounds, fouls and on the road, you give a team that’s playing with desperation life like that…. you can lose control of the game really quickly.”