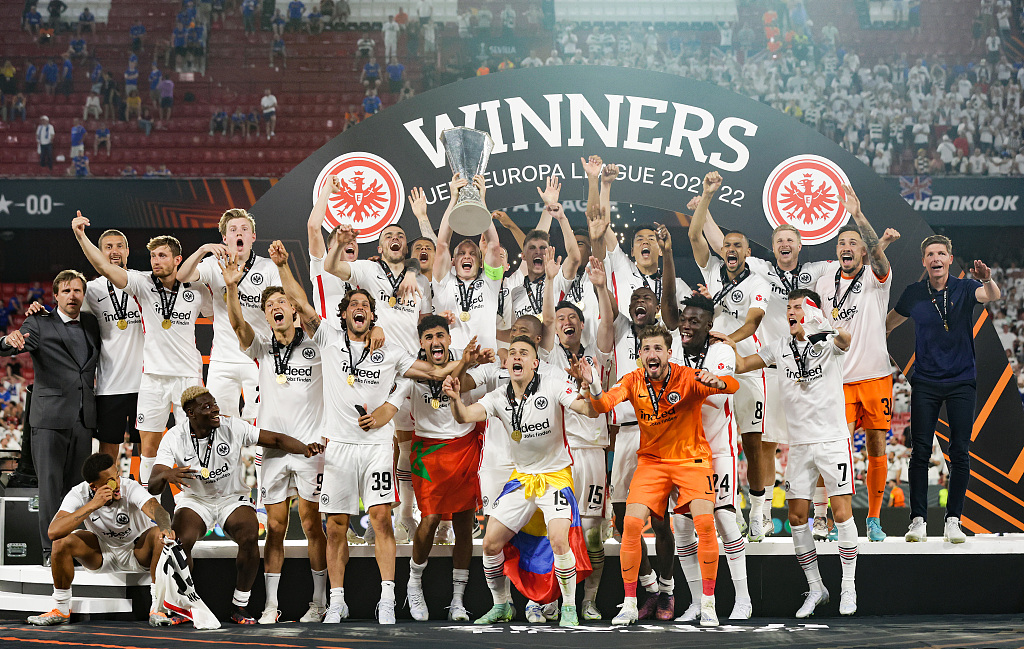 Frankfurt, who also won this tournament when it was called the UEFA Cup in 1980, had to come from behind in southern Spain before winning in a penalty shootout.

Midfielder Joe Aribo, playing out of position as a central striker, gave Rangers the lead on 57 minutes.

Rafael Santos Borre leveled for the Bundesliga outfit to force extra time, which then passed by without any major incident until the 118th minute when Kevin Trapp pulled off a superb save to deny Ryan Kent from point-blank range.

Trapp was again Frankfurt’s hero in the shootout, saving a spot-kick from Aaron Ramsey to help his side prevail 5-4.

Frankfurt had knocked out Real Betis, Barcelona and West Ham in previous rounds.

Their victory in the final saw them qualify for next season’s Champions League group stage, despite having finished 11th in Germany’s Bundesliga.

Story Of The Europa League Final

Seville’s Ramon Sanchez-Pizjuan Stadium looked incredible as it was colored with waves of crisp white Frankfurt jerseys on a sea of Rangers blue.

But Frankfurt midfielder Sebastian Rode needed to change his white shirt after it was bloodied by a high boot from John Lundstram inside the first five minutes.

Rode’s received a head bandage for his troubles, while Lundstram was lucky not to receive a yellow card.

Rangers had more of the ball in the first half, but Frankfurt posed the stronger threat.

Nine of the game’s first 10 shots were from Frankfurt, including one from Filip Kostic, who ran 70 yards with the ball before firing just wide.

There was a nervous moment for Rangers early in the second half as the VAR conducted a check for a potential penalty after Borre had gone down under a challenge from Connor Goldson.

Rangers survived the review and then went ahead shortly after.

Aribo latched onto a misguided Djibril Sow header and capitalized on a slip from center-back Tuta before finishing cooly with his left foot.

Rangers were only ahead for 12 minutes.

Kostic did excellently to fire in a low cross under pressure and Borre reacted quicker than Calvin Bassey to poke home a deserved equalizer.

Frankfurt looked like the more likely side to get a winner in 90 minutes, but extra time was a fairly tight and tense affair.

Rangers finished extra time on top though and would have won the game 2-1 had it not been for Trapp.

Trapp then produced another magic moment to sway a high-quality shootout in Frankfurt’s favour.

Nine of the 10 penalties were converted but Trapp managed to thwart former Arsenal midfielder Ramsey.