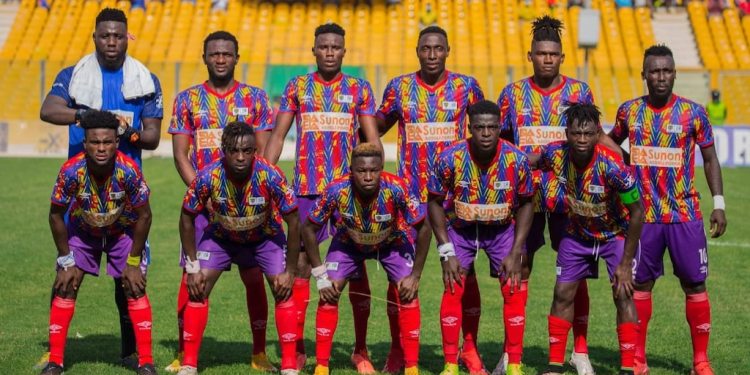 The Team Manager of Hearts of Oak, W.O. Tandoh, has disclosed that they cannot raise a team to honor their Ghana Premier League week 29 fixture game against Bibiani Gold Stars.

The Hearts of Oak team has been depleted following reports of an outbreak in the team’s camp.

Over 15 Hearts of Oak players have been hospitalized over strange diseases in various hospitals in Accra, according to reports.

The unknown illness is set to affect the Phobians’ preparations for their match-week 29 game against Bibiani Gold Stars on Wednesday at the Accra Sports Stadium.

Speaking in an interview on Wamputu Sports, W.O Tandoh confirmed the club is in a bad state and they may not be able to honor their game against Bibiani Gold Stars.
“The FA should be reasonable and postpone our game”, he told Happy FM.

“We don’t have one player who will even appear on the pitch for the game. The FA should do their investigations well. We don’t have a team. Sulley Muntari, Samuel Inkoom, they are all sick and these are our stars. The Coach has also developed symptoms and is currently at the 37 Military Hospital.

“I have been roaming in Accra to check on the players at their various hospitals where they have been hospitalized”.

He disclosed that only three members of the technical team have not been affected by the outbreak.

Meanwhile, Hearts of Oak may be punished by the GFA if they fail to play the game against Gold Stars. The team has arrived in the capital from Bibiani to honor the game.