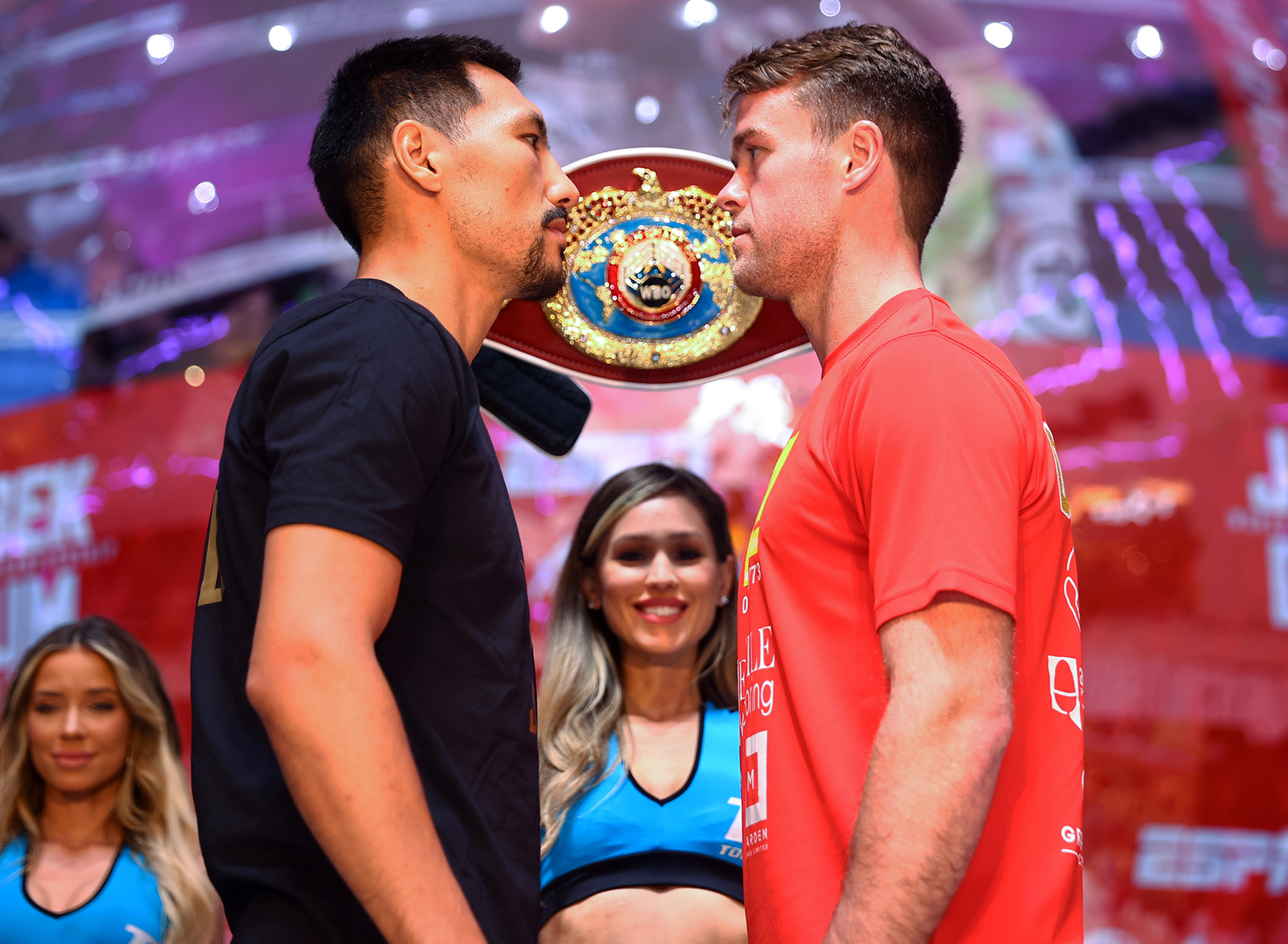 LAS VEGAS, NEVADA - MAY 19: Janibek Alimkhanuly (L) and Danny Dignum (R) face-off during the press conference prior to their WBO middleweight championship fight at Resorts World Las Vegas on May 19, 2022 in Las Vegas, Nevada. (Photo by Mikey Williams/Top Rank Inc via Getty Images)

Kazakhstan’s next middleweight star, Janibek “Qazaq Style” Alimkhanuly, has long called out world champions and 160-pound standouts. He finally gets a chance to win a belt this Saturday at Resorts World Las Vegas when he takes on fellow unbeaten contender Danny Dignum for the vacant WBO Interim middleweight world title.

Janibek (11-0, 7 KOs) is a 2016 Olympian who broke through in 2021 with knockout victories over former world champions Rob Brant and Hassan N’Dam. Dignum (14-0-1, 8 KOs), from Essex, England, has been the WBO European middleweight champion since knocking out Conrad Cummings in November 2019.

LAS VEGAS, NEVADA – MAY 19: Janibek Alimkhanuly (L) and Danny Dignum (R) pose during the press conference prior to their WBO middleweight championship fight at Resorts World Las Vegas on May 19, 2022 in Las Vegas, Nevada. (Photo by Mikey Williams/Top Rank Inc via Getty Images)

LAS VEGAS, NEVADA – MAY 19: Janibek Alimkhanuly speaks during the press conference with Danny Dignum prior to their WBO middleweight championship fight at Resorts World Las Vegas on May 19, 2022 in Las Vegas, Nevada. (Photo by Mikey Williams/Top Rank Inc via Getty Images)

“It’s boxing. Everything happens in boxing, as we all know. I am very happy that this young man took this fight. We’re going deliver a very good fight for the audience.”

“I think I’m one of the most avoided fighters. And I think in the future, many are going to continue to step aside. Many will not want to face me in the ring.”

“I respect him very much for taking this fight. He is a good fighter. He has a good record. He is 14-0. He has a good amateur career. But when we step in the ring, all the respect is going to go away. It’s boxing.”

Danny Dignum on the mic

“This is what I’ve dreamed of since I was nine years old when I first started boxing. I’m so pleased that the other fighters didn’t fight him because now it’s going to be my opportunity to fight him. He’s a very good fighter. I’ve prepared well. I’ve done everything possible to give myself every opportunity, and I’m ready to take it.”

“I’m pleased the other fighters didn’t take this fight because otherwise I wouldn’t be sitting here now with the opportunity to box for the interim world title. The opportunity came up, and I just said yes straight away. I’ve boxed to try to prove myself, and now I’ve got the opportunity, and I’ve grabbed it with both hands.”

“You’re going to see a good performance from me on Saturday. I’m going to cause a big upset. I’m going to gain a lot of fans. I’m looking forward to that.”

LAS VEGAS, NEVADA – MAY 19: Jamel Herring (L) and Jamaine Ortiz (R) face-off during the press conference prior to their lightweight fight at Resorts World Las Vegas on May 19, 2022 in Las Vegas, Nevada. (Photo by Mikey Williams/Top Rank Inc via Getty Images)

“Everything’s been good. It was a great camp. I’m just happy to be back in the ring. Jamaine is basically the only one that stepped up. You got to give him that respect. I’ve got nothing against anyone else. Richard Commey was a name that was thrown at us. But he’s moving up in weight. Robson Conceição was another name thrown at me. We were supposed to set up a match against Miguel Berchelt as well, but you see how that played out.”

“But I don’t complain. I don’t fuss. I really don’t give Top Rank or anyone an issue about who I match up with as long as it’s a fight that people want to see and it makes sense, then I’m all for it.”

LAS VEGAS, NEVADA – MAY 19: Jamel Herring speaks during the press conference with Jamaine Ortiz prior to their lightweight fight at Resorts World Las Vegas on May 19, 2022 in Las Vegas, Nevada. (Photo by Mikey Williams/Top Rank Inc via Getty Images)

“I always feel like I have something to prove. I mean, you guys know it really well. Even when I was champion, I was considered the underdog in big fights. When I fought Masayuki Ito, I was the underdog. When I fought Carl Frampton, I was a big underdog, and so on. I just have the mentality that no matter who is in the ring, you always got to take them seriously. You always have to prepare like your back’s against the wall. That’s how I prepare for every fight.”

“I had a great camp with Manny Robles. A lot of people don’t know, but we’ve had a relationship for over 10 years. Manny was actually in my corner when I was getting ready for the Olympics, through the AIBA Worlds, the Continental Qualifiers and even the Olympic Games. Coach Manny was there. I just want to put that out there. Even with the change, it’s not a big change. I’m familiar with him.”

“Maybe the opponent wasn’t something that I was expecting, but I’m not surprised at the road that I’m heading down by fighting a former world champion because this is what I expect in my career by moving up and trying to climb the ladder. These are the fights that are going to be headed my way.”

“I prepare for every fight with the same mindset. It’s a tough fight. I do what works. I do what fits best for me and for my body. We’re going to be ready on Saturday.”

“It’s a blessing. I’m happy to be here. We’re just taking it one fight at a time. I had a good camp with Brian Castaño. Shout out to him. He had a good fight. I’m just ready for whatever.”

“It’s been fun. I like fighting. I enjoy getting better as time goes on. With each fight, you see that I’ve been improving. It’s going to get better and better, and this Saturday, you will see.”

On Visiting the White House with the U.S. Olympic Team

“It meant a lot. Because of COVID, we didn’t get a chance to see the White House, so they arranged it for us. We went there in the beginning of May, and it felt like I was on the Olympic team all over again. Then we had a nice gala. It felt like I was at prom.”

LAS VEGAS, NEVADA – MAY 19: Jessie Magdaleno poses during the press conference with Edy Valencia Mercado prior to their featherweight fight at Resorts World Las Vegas on May 19, 2022 in Las Vegas, Nevada. (Photo by Mikey Williams/Top Rank Inc via Getty Images)

“It’s been a long two years, and I have been waiting, waiting and waiting. And now that the time is here, I am very excited about it. I can’t wait to shine.”

“I missed everything. The training. Getting punched. Feeling the hits. The soreness. I missed it all. I’m very pleased to be back.”