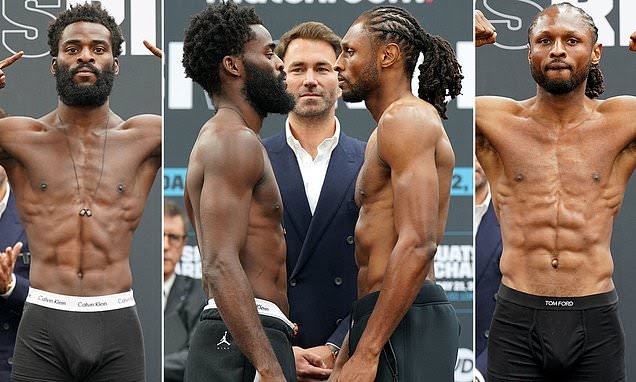 Joshua Buatsi will take to the ring first in Saturday night’s London grudge match against Craig Richards after losing a coin toss at Friday’s weigh-in.

The unbeaten knockout artist (15-0) is the favourite to emerge victorious, though both fighters hold ambitions of escaping a thriving domestic scene as they push on to world level in a light-heavyweight division littered with killers.

It was Buatsi who tipped the scales marginally the heavier of the two at 174lbs 12oz just over 24 hours out from the WBA title eliminator, while Richards weighed in in at 174lbs 4oz.

The pair have remained amicable throughout the build-up to the fight but there was tension in the air at London’s Old Spitalfields Market on Friday afternoon as the rivals engaged in a lengthy stare down.

No words were exchanged, but mind games certainly were, as Buatsi failed to take to the stage upon being called on first, instead waiting on ‘Spider’ – considered by most to be the ‘B’ side – to do so.

It will be bookies’ favourite Buatsi waiting around while Richards takes to the ring on fight night, however, after promoter Eddie Hearn settled the decision with an on-stage coin toss.

Buatsi exceeded all prior expectation as he claimed a bronze medal at the Rio Olympics in 2016, but Saturday night’s clash at the O2 Arena will be his toughest test yet in the pro ranks.

The 29-year-old was taken beyond seven rounds for the first time in his most recent outing against Ricards Bolotniks last year but, having insisted he’s levels above Spider throughout the build-up, on Friday doubled down on his pre-fight confidence.

‘No different, man,’ Buatsi said, when asked about the magnitude of the fight. ‘We’re less than 24 hours away, I’m looking forward to it.

Buatsi, who has been out in America training with veteran coach Virgil Hunter for the fight, looked in supreme condition as he weighed in comfortably inside the 175lb weight limit and insisted another victory is on the way.

Asked what the fans should expect tomorrow night, Buatsi said: ‘What I’ve brought in my last 15 fights, they know what to expect.’

Richards, too, has been confident throughout the build-up, particularly after Dmitry Bivol battered pound-for-pound star Canelo Alvarez earlier in the month.

Spider lost on points to the Russian in a significantly closer affair last year, with his stock rising considerably since then.

And Richards (17-2-1) insists the experience he has gained – both from fighting Bivol and from the numerous domestic clashes on his 20-fight resume, will prove priceless on Saturday.

‘From the hard work in the gym, from the progress I make,’ he said, explaining where his confidence comes from. ‘I’ve been here before, I’ve been in these 50-50 fights, the domestic fights, it’s not new to me.

‘We’ve seen myself as the underdog before and rip up the script multiple times, I’m looking to do that again on Saturday night.

‘You can’t buy experience, I’ve got that now, put it in my tool box and on Saturday night I’ll bring that out.’