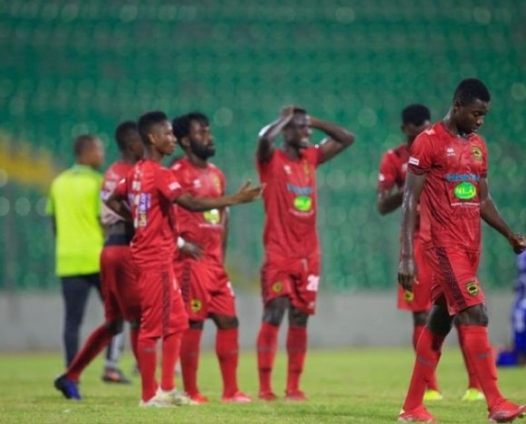 League leaders Kotoko, fell further down the line in their attempts to wrap up the Ghana Premier League title with games to spare, after a surprise 1-0 home defeat to Berekum Chelsea.

Following a return to the Baba Yara stadium after close to two seasons away, Kotoko’s rather imperious home performances catapulted them to the top of the table. But the Porcupines have faltered recently, with a humiliating 3-1 defeat to to Legon Cities, a 1-1 draw with Aduana Stars and Sunday’s 1-0 loss to Berekum Chelsea.

To deepen the woes of Kotoko, Etouga Mbella, who has been a marksman at the Baba Yara this season, failed to impress in Kotoko’s defeats, and even though the Cameroonian striker managed to score what was a thunderbolt in the draw with Aduana, he wasted two penalties to give Kotoko all three points.

After a successive poor display at home, which has raised some eyebrows, head coach, Narteh Ogum has demanded more from his players.

“When you play at home definitely you need to try as much as possible to double your effort because the opponents are coming to play ‘Kotoko’ and you know every team coming to play Kotoko comes with triple efforts. Apart from that, there are some few issues of injuries here and there. Most of the players are not really well, which shouldn’t be the case because once you are selected to come and play, you have to be able to deliver

So apart from these injury issues, I don’t think we should have any issues about how we play at home.”

Kofi Owusu’s red card in the 69th minute, meant Berekum Chelsea for about 22 minutes with 10 men, but a Kelvin Obeng goal in the 80th minute, left Kotoko and the Baba Yara stunned.

“I think when you’re playing at home, you need to show a lot of urgency. Somewhere in the first half I think we tried as much as possible to keep the ball high up their area to create those spaces around them. They had a solid defense trying to block those final passes into those spaces which made it very difficult for us to actually have clear chances at goal.”

Kotoko travel away to second-placed Medeama, who will be looking to reduce the deficit to three points.