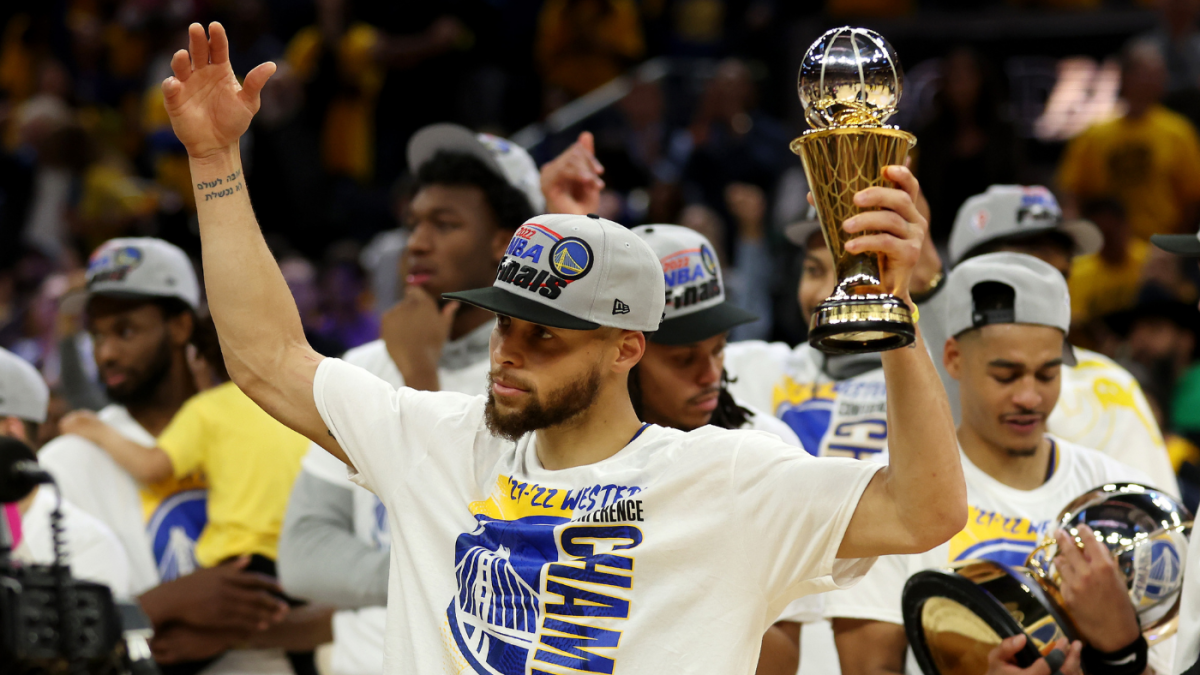 As Stephen Curry was named the inaugural Most Valuable Player of the Western Conference finals, Draymond Green gave the Golden State Warriors star a bear hug, lifting him up and letting out a scream.

Curry smiled and laughed as he celebrated returning to the NBA Finals, which came with the first Magic Johnson Western Conference finals MVP trophy after the Warriors eliminated the Dallas Mavericks with their 120-110 win in Game 5 on Thursday night.

The league introduced new trophies for the MVP of both the Eastern and Western Conference finals; the East’s trophy is named after Larry Bird.

Stephen Curry (30) laughs with Andre Iguodalal (9) after being named the Magic Johnson Western Conference finals MVP after the Golden State Warriors defeated the Dallas Maverics 120-110 in Game 5 of the Western Conference Finals to advance to the NBA Finals at Chase Center in San Francisco, Calif., on Thursday, May 26, 2022.

“The new trophy is pretty cool,” said Curry, a unanimous selection of nine media members. “Especially with who it’s named after, the standard that Magic set in terms of being a champion and playing the point guard position, whatever other position he played. Just the excellence that he demonstrated throughout his entire career.”

Drawing a lot of Dallas’ defensive attention, Curry finished Game 5 with 15 points and nine assists. He had an all-around performance in the Western Conference finals, averaging 23.8 points, 7.4 assists, 6.6 rebounds and 43.9% shooting in the series.

“He’s our engine offensively,” Warriors coach Steve Kerr said of Curry. “Everything revolves around him. We got a lot of great players around him and guys who fit well together. It all starts with Steph. He just creates so much havoc for the defense, that even on a night like tonight where he doesn’t shoot the ball that well, he forces rotations and frees up other players.

For Curry, the real reward is returning to the NBA Finals. After making five straight Finals from 2014-15 to 2018-19 and winning three championships, Golden State missed the playoffs for two straight seasons.

Curry missed 60 games during the 2019-20 season due to a fractured left hand. Klay Thompson had to work his way back this season from a torn ACL and torn Achilles.

But now the Warriors are in their sixth Finals in eight years, the first team to do so since the Michael Jordan-Scottie Pippen-led Chicago Bulls (1991 to 1998).

Thompson returns as a different player and person after all the injuries he has endured since the Warriors’ last Finals appearance in 2019. Green says he is at the peak of his defensive powers this time around because he says he’s smarter and in the best mental space of his life. And Curry says he returns to the Finals with more experience.

“Life on and off the court,” Curry said. “It’s another sense of that comfort, what these experiences are like dealing with the adrenaline, the nerves. Just being able to balance even just, like, family life. I’m blessed to have kids that are now 9, 6 and 3. When I was back in ’14, ’15, chasing those playoffs, just a different vibe in terms of everything that’s going on in life.

“It puts it all into perspective, the fact of where we are in our career, we’re still playing at this high of a level. Not thinking too far ahead, we want to get the job done in the Finals, but we still have a lot more in the tank.”