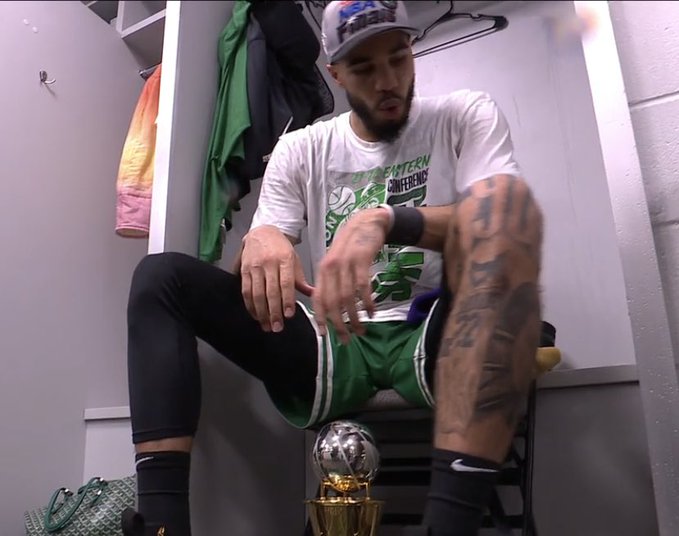 Quite fitting, the first-ever Larry Bird Eastern Conference Finals MVP award went to a member of the Boston Celtics.

After helping lead Boston to a 100-96 Game 7 victory over the Miami Heat on Sunday, Jayson Tatum was selected to win the inaugural award. The Celtics superstar received eight of the nine votes for the award as Heat All-Star swingman Jimmy Butler got a single vote.

Celtics legend and 1981 NBA Finals MVP Cedric Maxwell presented the award to Tatum with a flourish, calling out the Celtics superstar’s name with great excitement.

“It’s a great honour,” Tatum told ESPN’s Lisa Salters after receiving the award.”But you know, for some of us, this is the fourth time in the Conference Finals, this is my third time. And to get over the hump with this group, it means everything. I couldn’t be prouder of these guys. The road we took to get here, not a lot of people believed in us. We took the toughest route and it worked out.”

Tatum rose to the occasion in Game 7, showcasing why he was well deserving of the Eastern Conference Finals MVP award with a sensational 26 point, 10 rebound and six assist performance. It was a masterful game from Tatum, who paid tribute to the late Kobe Bryant by wearing an armband and custom Air Jordan throughout the contest.

“Everybody knows how much he means to me,” Tatum told Salters about his Bryant-themed armband. “My idol and my favourite player.  Just to have something to show him in the biggest game of my career so far, and it worked out.”

Game 1 of the Finals is scheduled for Thursday, June 2. With the exception of Game 4, there are at least two days off before every game.