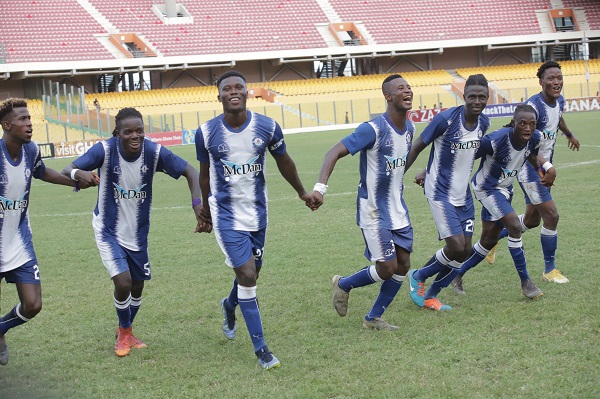 A brace by Abdul Yusif Razak in the 32nd and 81st minutes and a 17th minute volley by Amos Acheampong gave Great Olympics an emphatic 3-0 victory over their city rivals, Hearts of Oak, in their penultimate Ghana Premier League match played at the Accra Stadium on Sunday.

In a match watched by a sparse crowd, Olympics took total control of the match and opened the floodgates in the 17th minute when a combination between Samuel Abbey Quaye and Ibrahim Yusif found Acheampong in the vital area of Hearts. The lanky striker weaved his way through two markers before lifting a volley past Richard Attah, in post for Hearts, to break the deadlock

Razak Kasim (left), skipper of Great Olympics shields the ball away from from Kwadwo Obeng Jr of Hearts of Oak

This strategy worked well for Olympics since it wore down their opponents, as they kept attacking from all angles. It was, therefore, a matter of time for Olympics to increase the tally in the 32nd minute when Abdul Razak connected Abbey Quaye’s inswinger to bring the fans to their feet.

Down by two goals, and with pressure mounting on them, the technical team of Hearts replaced Benjamin York, Gladson Awako and Caleb Amankwah with Patrick Razak, Enoch Asubonteng and James Sewornu, respectively, in the 34th minute.

Their presence lifted the game of Hearts, who came close to scoring in the 41st minute when Fredrick Ansah Botchwey managed to slip through the tight defence of Olympics and fired a low grounder which missed the post by inches.

Back from recess, Hearts replaced experienced Sulley Ali Muntari, who had a quiet game, with Abu Ushau. The change saw Hearts multiplying in attack as left-back, Samuel Inkoom, occasionally joined the attack pushing Patrick Razak upfront. With Razak’s pace and combination with Suraj Seidu and Kwadwoi Obeng Junior, Hearts succeeded in pinning Olympics to their own half.

The defence of Olympics caved in occasionally, but their goalkeeper, Kwaku Stephen, deprived Hearts an opportunity to hit the back of his net.

The sharp reflexes, good anticipation and sheer bravado of Stephen caused him to make a double save by first denying Razak from adding his name to the score sheet in the 49th minute. Seconds later, the keeper, who had hit the turf to save Razak pile driver at close range, was on hand again to deny Hearts’ Obeng Junior.

In the 54th minute, the Olympics goalkeeper again stretched to lift Razak’s goal bound shot to corner which was wasted.

With the clock ticking slowly, the technical team of Heats started shouting at their players, urging them on but it was Olympics who taught them how to convert half chances into goals when Abdul Razak beat his marker to nod home a corner floated into the area of Hearts to give his side a double victory over Hearts in the league this season.