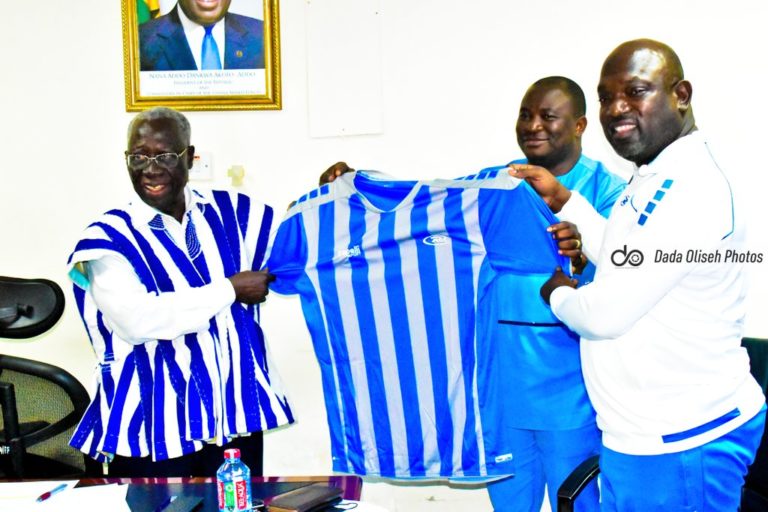 Senior Presidential advisor, Yaw Osafo Maafo has tasked the players, technical staff and management of Ghana Premier League new boys, Kotoku Royals to make their stay in the elite division a permanent one.

Mr. Osafo Maafo made this appeal when the team together with the management called on him on Friday afternoon to formally thank him for his contribution and support towards their qualification to the Ghana Premier League for the first time.

“You have made history as the first players and coaches to bring Premier League football to the Eastern Region and the people of Kotoku are proud of you. I have been in discussions with your CEO during the season and I am very proud of what you have achieved as a team”, Yaw Osafo Marfo told the team.

“What lies ahead of you si the most because now you are going to play with the big boys in the Ghana Premier League. My challenge to you is that you should make your stay in the Premier League a permanent one. Some of us are here to support you in our own small way.”

He assured the team that, together with the regional minister among others, he will look into ways with which they can honor their games in the Premier League at their current home grounds.

“I know the condition of your current home grounds and we will discuss how best we can upgrade it to the level or status of a premier league side. We do not want a situation whereby though you have qualified for the Premier League, you will be playing your home games away from your traditional grounds”, he assured.

Kotoku Royals F.C. is a professional football team from Akim Oda, Eastern Region in Ghana, was founded in 2003 and given permission to play professional matches in 2005, the club made successive promotions through the Ghana League system to Division One and now to the Ghana Premier League.

President of the Club,  Linford Asamoah Boadu who is also a member of the Executive Committee of the Ghana Football Association, thanked Mr. Osafo Marfo and the rest of the dignitaries who graced the short yet colorful meeting and promised to win the MTN FA Cup in their first season in the Ghana Premier League.