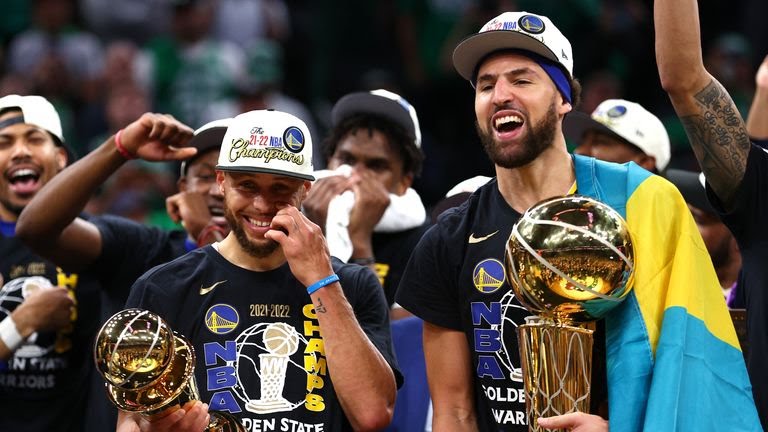 Stephen Curry produced another outstanding performance as the Golden State Warriors beat the Boston Celtics to become champions in Game 6 of the NBA Finals.

Curry bounced back from a disappointing Game 5 display – an outlier in an otherwise magnificent series for the Warriors superstar – to lead his team to a 103-90 victory at the TD Garden in Boston, sealing a fourth title in eight years for the franchise.

It comes just two seasons after the Warriors had the league’s worst record. This triumph completed a journey like no other, after a run of five consecutive finals, then a plummet to the bottom of the NBA, and now a return to greatness.

The dynastic run has been led by Curry, his fellow Splash Brother Klay Thompson and defensive lynchpin Draymond Green. That trio was at the centre of this title victory once again, with Andrew Wiggins joining to make huge contributions to the 2022 title triumph and Kevon Looney dominating on the glass throughout the postseason.

Fittingly, every one of the Warriors played a part in the Game 6 victory. Curry led the way though, with 34 points, seven rebounds and seven assists as well as two steals and one block – and it was enough to see him crowned NBA Finals MVP for the first time in his career.

Green had his best game of the NBA Finals and was all over the court throughout Game 6, coming close to a triple-double with 12 points, 12 rebounds and eight assists as well as two steals and two blocks.

Thompson, who completes a remarkable personal comeback after returning earlier this year following two-and-a-half years sidelined by injury, managed a dozen points of his own. He put in thousands of hours working in the background to allow him to get back to this stage and become a champion again.

“It all paid off,” Thompson said. “It was dog days, a lot of tears shed. You knew it was a possibility, but to see it in real time, it’s crazy.”

Wiggins scored 18 points, with six rebounds, five assists, four steals and three blocks – a box score that exemplifies the massive contribution he made in all areas of the game throughout the series, as the Warriors’ second-best player in the NBA Finals.

The Warriors win a fourth title, and for a third time, the victory has been taken on the road. The first three rings came in 2015, 2017 and 2018, when Golden State was dominant and made five consecutive trips to the finals. Thursday night’s victory sees the Warriors claim the franchise’s seventh championship overall, moving them clear in third place all-time behind the Celtics and the Los Angeles Lakers, who remain tied on 18 apiece at the top.

It did not look like things were going to end in the early stages though, as Boston shot out to a 14-2 lead. The Celtics’ passing and spacing was slick to start the game and the crowd was going wild.

Not pleased with what he was seeing, Steve Kerr – who is now a nine-time NBA champion, five as a player and four as coach of Golden State – called a timeout and the Warriors improved their off-the-ball defense thereafter. His opposite number, Ime Udoka switched up rotations, pulled Jayson Tatum out a bit earlier and put in Payton Pritchard in an attempt to up the levels of production from his bench unit.

It did not work, as Pritchard, Derrick White and Grant Williams were all minus-20 or worse for their minutes on the floor at half-time as the Warriors on 54-25 run after the Celtics’ early lead to have a very comfortable advantage heading into the break. Only Grant Williams got back above that mark following the second half, finishing minus-18.

The Warriors bench players, on the other hand, gave some massive minutes as the Celtics surrendered 21 successive points in the second and with it, their chances of NBA title glory.

Jordan Poole gave us all an invitation to the ‘Poole Party’ to help turn the tide, with some massive three-pointers in the first half. He finished the game with 15 points.

Looney lost his starting place during the series to Otto Porter Jr (he had six points, going 2-of-3 from the field, both from beyond the arc) but still was the Warriors’ primary big man throughout the series. He grabbed six offensive rebounds and his domination of the glass on that end was vital in providing second-chance opportunities for the Dubs as they built the lead.

Gary Payton II, who recovered from a fractured elbow in just a month to ensure he was ready for the finals, had best net rating of the Warriors players, finishing plus-18 for his minutes on the floor, adding six points along with three rebounds and three steals.

This has been a series of third-quarter runs and Al Horford, the one veteran player on a youthful Celtics roster, was massive in the third quarter. He scored 11 points in the third frame as well as grabbing five rebounds and producing a huge block which saw the Boston crowd roar back into life.

Jaylen Brown, who matched Curry with 34 points to lead Boston in scoring, told the team to “take that look off their faces and keep playing” during a timeout as despondency began to kick in with some of their young squad.

The hosts pulled it back within single digits at one point but with 22 turnovers by the end of the, they were never going to complete the comeback.

It was just the fifth defeat in 22 title-series appearances for Boston, which turned its season around to have a chance at this crown. Boston was 25-25 after 50 games, then went on an absolute tear to get to the finals and nearly claim what would have been just the franchise’s second championship since 1986.

Tatum went scoreless in the second half until the third minute of the third quarter and his disappointing NBA Finals finished with just 13 points on 33 per cent shooting.

Horford had 19 points and 14 rebounds by the end for an impressive double-double, while his frontcourt partner Robert Williams III recorded 10 points, seven rebounds and five blocks. Time Lord’s impressive displays despite carrying an injury throughout the NBA Finals are a positive for the Celtics moving forward.

The day belonged to the Warriors though, and it probably was going to as soon as Green, who had missed his first 12 three-point shots in the series, buried one in the corner late in the first quarter. He added another before the end of the game, but it was Curry who took star billing.

There was time before the end for Andre Iguodala, the Finals MVP in 2015, to get on the floor for what may well be his last appearance as an NBA player. He joins Curry, Thompson and Green in picking up a fourth ring.

NBA Commissioner Adam Silver could not be at the game because he remained in the league’s health and safety protocols related to the virus. The redesigned Larry O’Brien Trophy – the golden souvenir given to the NBA champions – was presented to the Warriors by deputy commissioner Mark Tatum instead.

“We found a way to just get it done,” Curry said after the Warriors accepted the championship trophy and celebrated on the court. “It’s part of a championship pedigree, our experience. We built this for 10-11 years. That means a lot when you get to this stage.”

On their return to that stage following the devastating fallout of the 2019 NBA Finals which saw Thompson tear his ACL and Kevin Durant tear his Achilles tendon before deciding to leave the franchise, the Warriors reached the summit of the basketball world once again.