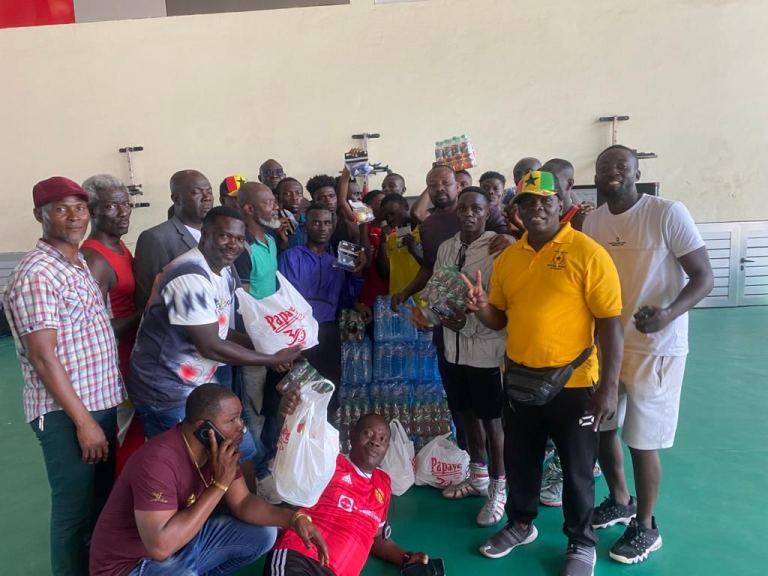 Two former members of the national boxing team (Black Bombers), Emmanuel Addo popularly known as Money Mosquito now CEO of TMM Sports and Ahmed Alhaji Saraku, a former captain of the Black Bombers who is now a Care Community Service Manager in Australia have teamed up with Australia based renowned Ghanaian boxing referee, coach and manager, also a former executive member of the Ghana Boxing Federation (GBF), Theophilus Edwin Addo to make a donation today to the team ahead of their imminent departure to the 2022 Commonwealth Games in Birmingham, UK later this week.

Following wide media reports of neglect of the team during their preparations for the competition, during which they only had non-residential camping, the trio who are all based abroad, solicited among themselves to show love to the young men going to represent Ghana in England.

Hot meals, water, beverages and an undisclosed amount of money were presented to the team on Tuesday after their daily training at the Bukom Boxing Arena.

In addition, Emmanuel Addo (Money Mosquito) has also promised a special package for anyone who wins a medal at the Commonwealth Games.

Present at the event were the GBF 1st and 2nd Vice-Presidents, Dauda Fuseni and Solomon Otoo Lartey.

“This is just to encourage you guys to never lose hope but always keep the dream alive because no matter what you are going through there’s light at the end of the tunnel. Believe in yourselves because we strongly believe you guys as well,” said a message from the donors.