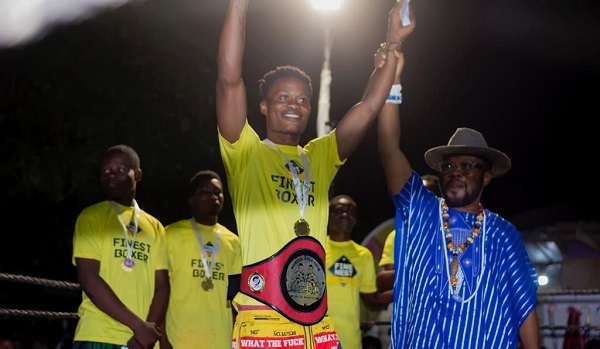 There was a lot to cheer at Obenetsonshi, Nungua in the Greater Accra Region when Southside Entertainment and African Global Talent with support from Fine Nest Paints, organised the debut edition of the Area Code Boxing tournament on Saturday, July 30.

Area Code Boxing, according to Samuel Nii Noi Tetteh, spokesperson for the organisers, aims at unearthing talents in Nungua and Teshie.

“It is known everywhere that most of Ghana’s best boxers come from ???Ga Mashi,??? especially Bukom and Jamestown. Those places have similar characteristics with Nungua and Teshie. We believe that with some well-directed effort, we can produce good boxers from Nungua and Teshie as well,” Nii Noi said.

The tournament was specifically for Nungua and fighters were drawn from youth groups in the town. They were La Liga Boyz, Rebo Youth, Young Heroes, TVE HIE, Yeiamang, Alingo and Gbojor City.

Earlier elimination fights had whittled the number of fighters for the final day to eight. Divided into two groups, A and B and placed in weight categories between 59 kilos and 98 kilos, the fighters were Aku-Dade, Lighter, Gideon, Machine, Michael, Bismark, Alhaji and Yaro King Kong.

After a series of tactics such as body punches, straight jabs, sidestepping, counter punching , infighting and ducks downs which delighted the spectators, Aku-Dade of La Liga Boyz emerged champion in Group A, while Michael of Yeiamang dominated Group B.

Officials for the tournament came from various boxing clubs in Jamestown.

The winning boxers each received a prize of GH¢1000, as well as belts and medals. First and second runners-up in each group received GH¢500 and GH¢300 and medals respectively.

The success of the tournament was achieved with keen support from B.B.C. Industrials Company Limited, makers of Fine Nest Paints and Leyland Paints. The company’s Marketing Manager, Korkor Adiamah, represented them at the event. She said the Fine Nests Paints brand supported the tournament because of it’s belief in raising up the finest heroes in the community by helping the youth to discover and develop their innate abilities.

Nii Noi stated that dates for the Teshie elimination and final tournament would be announced soon. He added that boxers at Teshie have indicated they were seriously training and eagerly looking forward to their turn in the ring.

“Our intention is to set up a modern gym to serve boxers from Nungua and Teshie and set on the path to producing good quality boxers to compete for national, continental and other international titles,” Nii Noi pointed out.

He was grateful to his team of Enoch Borlabi, Martin Bortey, Eugenia Naa Borley, Samuel Oblah and Felix Sango for helping to pull off a successful tournament.