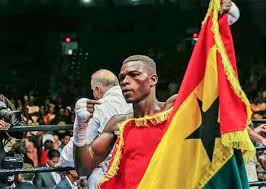 Per his co-manager, Michael Amoo-Bediako, former IBF lightweight champion of the world, Richard Oblitey Commey remains unfazed with the reported warning by the Ghana Boxing Authority (GBA) not to use the Ghanaian flag in his upcoming super lightweight 10-rounder against Jose Pedraza of Puerto Rico Saturday night in Tulsa, Oklahoma, USA.

Having already placed an indefinite ban on Commey back in January this year, the Ghanaian boxing governing body, through their Communication Director, Mohammed Amin Lamptey, have warned the fighter on Accra based radio station, Happy FM not to fight under the Ghana flag come Saturday night because he is “still under suspension.”

But in a swift response from fight camp ahead of weigh-in later today, co-manager of Commey, UK based Michael Amoo-Bediako has called the bluff of the GBA and remains adamant the boxer will heed to no such warning when he steps into the ring at the Hard Rock Hotel and Casino in Tulsa tomorrow night.

“The Ghana flag will be flying high, I promise you that,” Amoo-Bediako responded without delay to Sportsinghana.com enquiries.

“Richard Commey is a Ghanaian, always has been and always will be. His achievements representing Ghana and Ghanaian boxing have been recognised all over the world and he is held in very high regard amongst the boxing fraternity,” he pointed out.

“Once again RC will be headlining an event which will be broadcast by ESPN and shown live from coast to coast across United States of America, also Skysports will be broadcasting the event live across the UK, this shows the popularity of Richard that he continues to be a headline act,” Mr. Amoo-Bediako reiterated

“Top Rank Boxing, DiBella Ent and Streetwise Management are proud to be associated with Richard Commey and once again he will show on Saturday night the fighting spirit of being a Ghanaian,” he stated.

Commey returns for a first fight at junior lightweight, having fought at lightweight all his career. He lost his last fight, via unanimous points to Vasiliy Lomachenko.