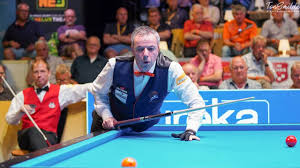 The 2022 edition was his sixth edition of The World Games: he has competed at the Games since Akita 2001. He has altogether two gold and two silver medals and a fourth place.

More than deservedly, he is The World Games Athlete of August 2022!

Dick Jaspers started playing Billiards when he was three years old in the pub his parents ran in his home town. He became a professional player at the age of 21.

In the 1990s, some of the professional players were denied from playing in the European and World Championships, but the issue was sorted out after a couple of years.

When asked about his future, Jaspers exclaimed: “Yes, I would love to play my seventh [edition of The] World Games!” So look out for him in less than three years in Chengdu, at The World Games 2025!