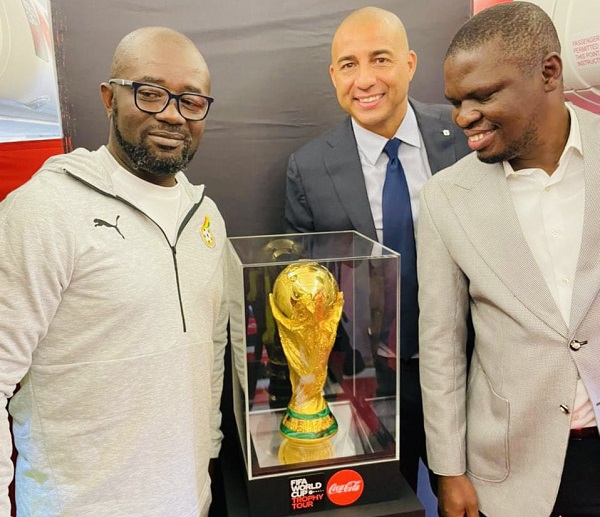 The Minister of Youth and Sports, Mustapha Ussif has disclosed that all the stakeholders of the Black Stars have put in place a plan to ensure that Ghana wins the 2022 FIFA World Cup in Qatar.

According to the Minister, Ghana would live up to its reputation as a football powerhouse in Africa by winning the World Cup.

Mr Ussif made this known on Saturday at a press briefing held in Accra as part of the Coca-Cola FIFA World Cup trophy tour.

“As a football powerhouse of Africa, Ghana is hopeful and believing that Insha Allah, come November-December, we will be bringing the trophy back here to Ghana as the champions of the football family,” he said.

“We are very hopeful and we have a plan with the key stakeholders of the sports industry to put our plans together, so we have the belief that Insha Alla in December, the Stars will shine in Qatar”.

For the Ghana Football Association President, Kurt Okraku, his target for the team was for them to qualify from Group H where they are scheduled to play Portugal on November 24, South Korea (November 28) and Uruguay (December 2).

He added that the Black Stars and the GFA Executive Council were determined to rewrite history but required the support of the Ghanaian public to do so.

“We would be very, very competitive, our singular determination is to go out of the group and once we come out of the group, the rest is open for everybody,” Mr Okraku said.

“…We are Ghana and we would show to the world that we are Ghana, let us all rally behind the team”.

For his part, FIFA legend and ambassador of the FIFA World Cup Trophy Tour, David Trezeguet said he was delighted to be in the country and looking forward to seeing Ghanaians experience the trophy.

The Vice President Franchise Operation West Island & Mid Africa of Coca-Cola, Rodrigue Bila said his outfit was thrilled to have partnered FIFA to send the World Cup trophy around the world

He also disclosed that Ghana was the first country to receive the trophy in Africa on the 2022 edition of the trophy tour.

Mr Bila was hopeful that Ghanaian fans would seize the opportunity to make lasting memories with the iconic solid gold trophy.