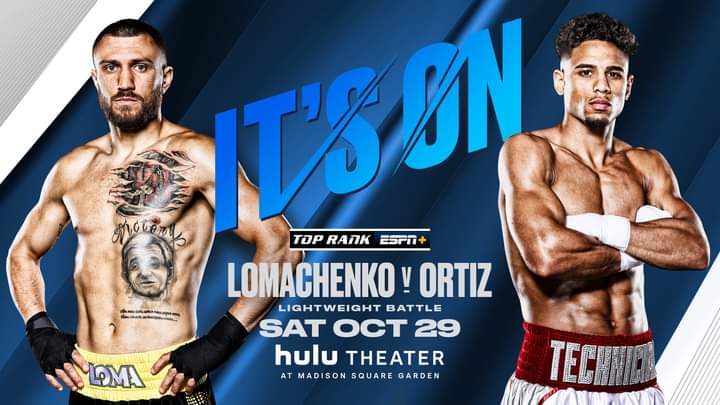 Ukraine’s former pound-for-pound king, the man known as “Loma,” is back.

U.S. Olympic silver medalist Richard Torrez Jr. (3-0, 3 KOs), who is coming off a 44-second knockout over Marco Antonio Canedo in August, looks to make it 4-0 in a six-round heavyweight special feature.

Lomachenko-Ortiz, Ramirez-Magdaleno, and Torrez Jr. headline a card that will stream live and exclusively on ESPN+. Promoted by Top Rank, tickets starting at $56 go on sale Thursday, September 15 at 12 p.m. ET and will be available to purchase at Ticketmaster.com.

Lomachenko was set to fight then-unified lightweight champion George Kambosos Jr. earlier this year, but when Russia invaded Ukraine, he put his boxing career on hold to join a territorial defense battalion in his homeland.

“Vasiliy Lomachenko is a credit to his country and the sport of boxing,” said Top Rank chairman Bob Arum. “When his country needed him, Vasiliy did not hesitate. We are thrilled that he is safe and fighting once again at Hulu Theater at Madison Square Garden, his home away from home. Jamaine Ortiz is a young, hungry, undefeated fighter who understands that a victory over a living legend like Loma would be life-changing.”

Lomachenko (16-2, 11 KOs) has a résumé that is unmatched in modern boxing. A two-time Olympic gold medalist for Ukraine, he had a 396-1 amateur record, won a world title in his third pro fight, and became a three-weight world champion in his 12th bout. Lomachenko unified three of the four lightweight titles before a loss to Teofimo Lopez in October 2020 derailed his quest for undisputed supremacy. Last year, he came back with one-sided victories over Masayoshi Nakatani and Richard Commey. Lomachenko is 5-0 at Madison Square Garden Entertainment’s venues, including the win over Commey and his one-sided drubbing over fellow two-time Olympic gold medalist Guillermo Rigondeaux. He arrived in Southern California last month to resume his career and work towards his goal of capturing the undisputed lightweight title, which is currently held by Devin “The Dream” Haney.

Lomachenko said, “I love my sport, and I am so glad to be back. My goal is to win the undisputed lightweight title, but I will not take Jamaine Ortiz lightly. Madison Square Garden and Hulu Theater at MSG have been special places in my career, and I look forward to making more great memories on October 29. I want to dedicate this fight to all my Ukrainian people. I wear the flag proudly every time I step in the ring.”

Ortiz (16-0-1, 8 KOs), from Worcester, Massachusetts, enters this bout hoping to stun another former world champion on the comeback trail. He last fought May 21 in Las Vegas, wearing down Jamel “Semper Fi” Herring down the stretch to earn a 10-round unanimous decision. Ortiz is a six-year pro who plied his trade on the New England club scene. Three months before the Herring triumph, Ortiz won the NABF lightweight strap with a clear decision win over Nahir Albright. Ortiz made his Top Rank on ESPN debut in April 2021 with an eight-draw against Joseph Adorno, surviving a pair of knockdowns in one of the year’s best action battles.

Ortiz said, “I’m excited about this fight. Vasiliy Lomachenko is a great fighter, but I’m here to win. Once I win this fight, I’m targeting a world title opportunity. This is a dream come true.”

Ramirez (10-1, 6 KOs), from Cienfuegos, Cuba, starred at the 2012 London Olympics alongside Lomachenko. He won the first of his gold medals, while Lomachenko dominantly captured gold medal number two. Ramirez ruled the amateur ranks for another six years before defecting from Cuba. After a stunning loss in his 2019 professional debut against Adan Gonzales, Ramirez has been flawless during a 10-fight winning streak that has seen him avenge the Gonzales loss and crack the top 15 of all four major sanctioning organizations. He authored his most notable victory to date in June at Hulu Theater at MSG, knocking out the previously undefeated Abraham Nova with a left hand in the fifth round. That one-shot knockout propelled Ramirez into the title conversation, and he hopes to get that shot before long. But, first, a former world champion stands in his way.

Ramirez said, “It is great to be back at the iconic Hulu Theater at Madison Square Garden. I am particularly excited to do so as co-main event of the evening that marks the return of the great Vasiliy Lomachenko, whom I admire and consider one of the greatest talents of all time. It’s rare to have two two-time Olympic gold medalists on the same card, and it is an honor for me. As far as Magdaleno is concerned, he represents an important challenge as he is an excellent boxer, a southpaw, and a former world champion.”

Magdaleno (29-1, 18 KOs) ascended to the top of the junior featherweight division in November 2016 with his decision victory over Nonito Donaire. His title reign ended at the hands of Isaac Dogboe in April 2018, but he is 4-0 since losing to Dogboe and subsequently moving up to featherweight. He shook off an extended layoff in May to shut out Edy Valencia over eight rounds. A native of Las Vegas who has showcased his talents at many of the city’s most storied venues, Magdaleno will be making his New York City debut against a recently unstoppable train.

Magdaleno said, “I am coming to shock the boxing world. I know what a victory would mean for my career. My goal is to become a two-time world champion, and Robeisy Ramirez is in my way. Just know that I am ready.”

In addition to Torrez, three of his Olympic teammates from Tokyo will see action under the lights. Tiger Johnson (5-0, 4 KOs) makes his New York City debut in a six-round junior welterweight bout, featherweight silver medalist Duke Ragan (7-0, 1 KO) steps up in his first scheduled eight-rounder, and Troy Isley (7-0, 4 KOs) tests the junior middleweight waters in an eight-rounder.