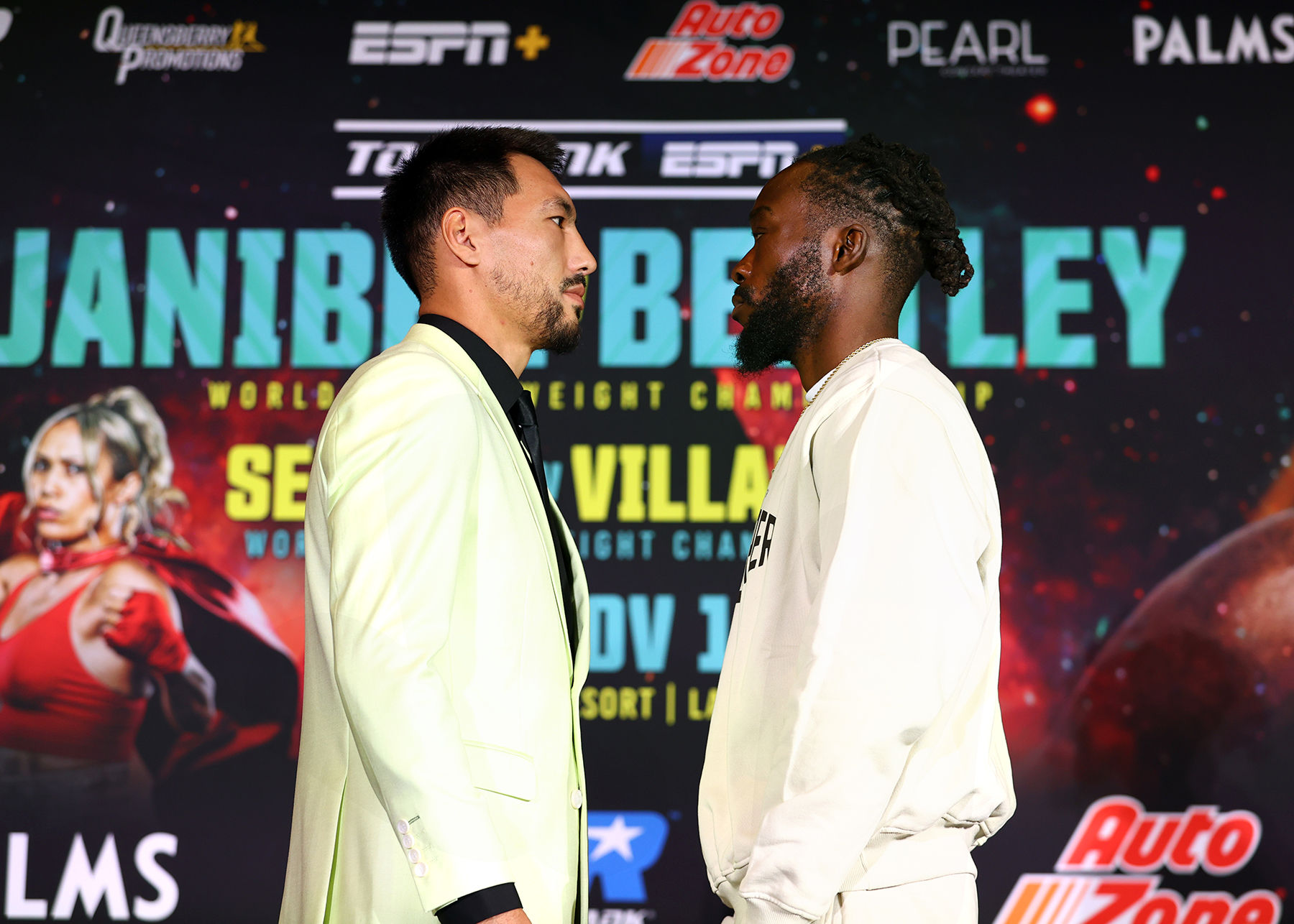 Two world champions and the son of a modern boxing legend hit Las Vegas for a press conference two days away from a world title doubleheader at Pearl Concert Theater at Palms Casino Resort.

In the main event, middleweight boogeyman Janibek “Qazaq Style” Alimkhanuly (12-0, 8 KOs) will defend his WBO world title against British champion Denzel Bentley (17-1-1, 14 KOs). This is the first title defense for Janibek, who was elevated from interim champion after Demetrius Andrade elected to move up in weight.

In a four-rounder, lightweight sensation Emiliano Vargas (1-0, 1 KO), the youngest fighting son of Fernando Vargas, will make his Top Rank debut. His father also serves as his head trainer.

“Last time {I fought}, it was just the beginning of my knockout career. I hope God will {give me the strength} to do much better, and you can see all of my good punches.”

“When I came to America, it was already in our plans to bring a good team around us. Because of this team, I am a champion now.”

“I don’t know why nowadays champions don’t want to fight with the other champions. I don’t think they should be afraid. I am here. I am a champion now. I am here to fight the champions. Hopefully, Top Rank can organize a fight with another world champion next.”

“This means a lot. We’re at the top of the sport now. This is what I’ve dreamed of as a fighter. This is what every fighter dreams of. It’s the opportunity of a lifetime to be here in Vegas and fight for the WBO world championship against the champion himself.”

“You’re going to see something special.”

On Janibek saying he will knock him out:

“He’s meant to say that. He wants to keep his KO streak and so do I. We’re in for a good fight Saturday.”

“I’ll be back in the ring after over 300 days. I’m so blessed to continue, and end, my career with Top Rank. I thank God, and I thank Bob Arum and Top Rank for giving me the opportunity to represent women’s boxing. They’ve done such a great job with Mikaela Mayer, and I’ve always noticed that and recognized that. I’m happy that now I can be back in the ring and show everybody what I’m about and continue to rack up world titles.”

“I don’t underestimate anybody that I step in the ring with. I know that this is her time to shine. I know she’s coming in to defeat me, and she’s coming in as the underdog. I know she’s training harder than she’s ever trained before, and I’m training harder than I’ve ever trained before because, now, I have a bigger and better platform. I know I still have a lot to prove. I know Argentineans are tough, but I have that Mexican blood and Mexican heart. I come from where fighter like Fernando Vargas came from and other great Mexicans. I’m going to show that Saturday night.”

“It’s very special because these last 11 months have been difficult for me staying out of the ring and not fighting. So, I felt like I was missing out on so much because I’m so competitive, and I want to show that I’m great. I know it means so much to my father and {head trainer} Dean {Campos}, who put so much time into me when women’s boxing was nowhere. Women’s boxing has had the most amazing year this year. Fast forward to now, I feel like I didn’t miss out on anything these past 11 months because I’m back at a better time in women’s boxing than ever. I’m just going to elevate women’s boxing so much more.”

“It’s a happiness I cannot hide. I’m happy, and I’m ready for this moment.”

“This is a big opportunity. I’m going to take full advantage of it. I feel like they are underestimating me a little bit, but I come from the land of ‘Chino’ Maidana and all these great Argentinean fighters. We are going to put on a great show Saturday.”

“I prepared to get the title away from the champion. She’s like the fifth-ranked women’s fighter in the world, and I’m going to take full advantage of this opportunity. That’s how I prepared.”

“God is the greatest. I want to thank Bob Arum personally for the taking the time and even considering signing me. It’s a blessing. Top Rank has had all the stars of boxing in history. You look back, it’s had Floyd Mayweather, it’s had Oscar {De La Hoya}. it’s had countless, countless world champions {and fighters} I look up to. It’s a blessing. I want to thank my management as well for looking over everything and making sure everything is right. We’re ready to put on a show November 12.”

“{My father} is everything I need him to be. A great father, especially with him not having a father… we have a beautiful dynamic. He’s everything I need him to be. He doesn’t really need to get on me. I know exactly what I need to do, and this camp has been phenomenal. I’ve had the opportunity to spar with Jorge Linares this entire camp. I’m ready to go. I’m ready to show the world that these Vargas’ can fight. We’re not just a last name. You’ll be surprised. Believe me, you’ll be surprised.”