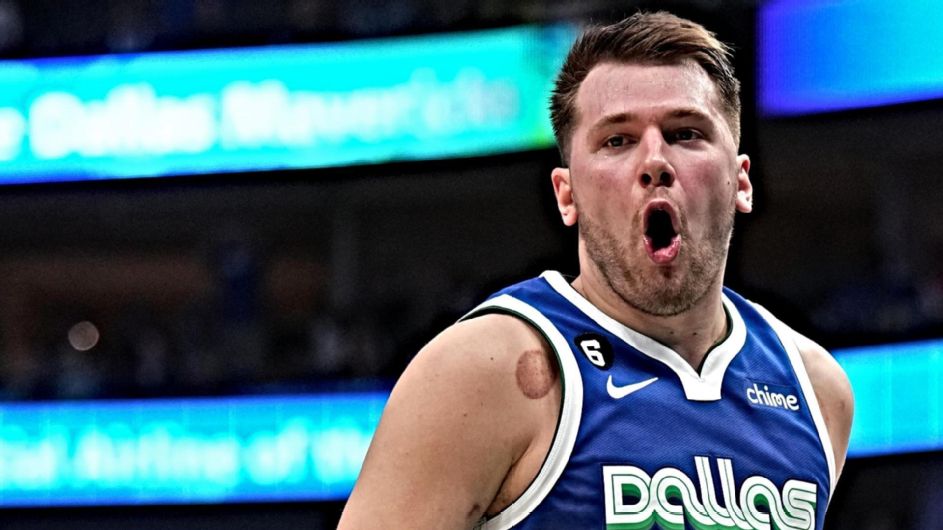 Luka Doncic intentionally missed a free throw, came up with the loose ball and flipped it into the basket while falling down with one second remaining in regulation. After a quick roll, he hopped back onto his feet and did an impromptu dance to celebrate, chopping his feet while frantically waving his hands up and down.

When the buzzer sounded a second later, Doncic continued his celebration, putting his fists in the air and bouncing up and down while prancing up the sideline, soaking in the adulation from the American Airlines Center sold-out crowd that was worked into a frenzy by the superstar’s historically sensational triple-double Tuesday night.

Doncic proceeded to put the finishing touches on a statistical line never before seen in the NBA — 60 points, 21 rebounds and 10 assists — to allow the Mavericks to pull off an improbable 126-121 comeback win over the New York Knicks.

“Two steals, one block. Jump ball, too,” Doncic jokingly noted when asked about his 60-21-10 line, which broke Dirk Nowitzki’s franchise record for points in a game and set Doncic’s career high for rebounds.

Doncic’s 60 points tied the record for the highest-scoring triple-double in NBA history, matching James Harden’s 60 for the Houston Rockets in a Jan. 30, 2018, win over the Orlando Magic. Hall of Famers Wilt Chamberlain (twice) and Elgin Baylor are the only other players to grab at least 20 rebounds during a 50-point triple-double.

That earned Doncic a dousing from teammates armed with dozens of water bottles as he entered the locker room after the victory.

“To do something that’s never been done before, that’s hard to do,” Mavs coach Jason Kidd said. “There’s been some great players before him. Elgin Baylor and Wilt, he was in that class, and then he separated himself and made his own class.”

As much as Doncic’s statistics pop out of the box score, it’s not necessarily shocking that he put up those kind of numbers. He’s only 23 years old, but he already has six career 40-point triple-doubles, tying LeBron James for the fifth most in NBA history. Doncic has scored at least 50 points in two of his past three games, hitting the marker in Friday’s road win over the Rockets.

“Guys say all the time that we see it and we know his greatness, but he’s showing up on a whole different level in a whole lot of different ways,” Mavs center Dwight Powell said. “This tonight, there’s not really any way to accurately describe that. It’s hard to believe — 77 is different.”

The most stunning statistic from the Mavs’ win over the Knicks? Dallas became the first team in at least two decades to pull out a victory after trailing by at least nine points in the final 35 seconds. Teams in that situation had been 0-13,884 in the past 20 years, according to ESPN Stats & Information research.

“That was really impressive,” said Doncic, who credited big men JaVale McGee and Christian Wood for battling to create the loose ball that led to his last-second putback. “The whole team just keeps going. Everybody just kept it together. We believed.”

Doncic, the seventh player in NBA history to score at least 50 in a triple-double, scored or assisted on 85 of the Mavs’ 126 points. That is the most points he generated in any game of his career, according to Elias Sports Bureau research.

“I promise I was trying for sure,” said Knicks guard Quentin Grimes, the primary defender on Doncic. “I mean, I’m trying to get over every pick-and-roll. He’s in almost every action. It was a lot on me trying to get over every pick-and-roll with him. He’s crafty with the ball, without the ball. Have to know where he is at all times on the court. He’s one of the top three players in the league for a reason. I have to tip my hat.”

Doncic was 21-of-31 from the floor and 16-of-22 from the free throw line. He scored 38 points after halftime as the Mavs rallied from a deficit that was as large as 12 points to beat a New York team that didn’t have point guard Jalen Brunson (hip) and lost wing RJ Barrett (right index finger laceration) less than two minutes into the game.

“He is monster player,” Knicks coach Tom Thibodeau said of Doncic. “There are some plays I thought he made good plays and was aggressive. But you can’t keep fouling a guy and give 22 free throws up.”

Doncic played 47 minutes in the game, a season high. He rested a total of 12 seconds after halftime.

“I’m tired as hell,” Doncic said with a wide smile during the Mavs television broadcast’s on-court interview at the end of the game. “I need a recovery beer.”