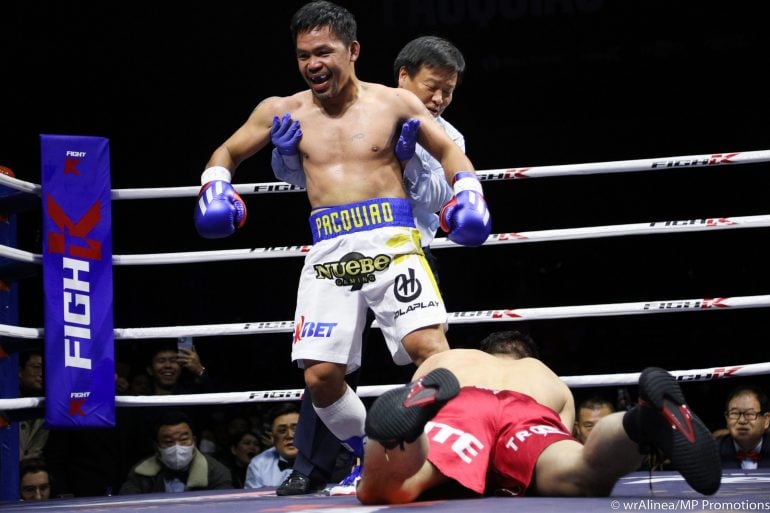 The 44-year-old retired boxing legend has signed with Japan-based MMA promotion Rizin, he announced at Saturday’s Rizin vs. Bellator event in Saitama, Japan. The former eight division champion told reporters that he would likely face an unnamed Japanese mixed martial arts fighter in an exhibition on a date to be announced.

Pacquiao (62-8-2, 39 knockouts) hasn’t fought a sanctioned bout August of 2021, when he was outpointed by Yordenis Ugas. Pacquiao returned to the ring in mid-December, rag-dolling self-declared martial arts expert DK Yoo in a six-round exhibition in South Korea.

Rizin has also worked with Pacquiao’s long-time rival Floyd Mayweather on a series of exhibitions, including his first round demolition of kickboxer Tenshin Nasukawa in 2017, and a two round beating of MMA veteran Mikuru Asakura in September. The two traded barbs at a Rizin press conference in September, but Pacquiao dismissed any discussions of facing Mayweather once more for the time being.

“My plan today is, one at a time. So lets finish first this commitment to Rizin and then we’ll talk about it,” said Pacquiao.

MP Promotions President, Sean Gibbons hinted in a recent conversation with The Ring that Pacquiao could eventually appear on the same card with his son, amateur boxer Emmanuel Pacquiao Jr.

Pacquiao had previously fought in Japan in 1998, knocking out Shin Terao in one round in Tokyo.