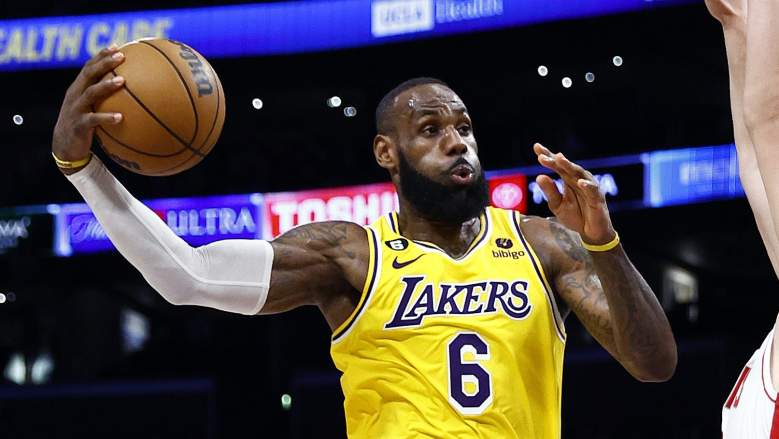 LeBron James fired off a cryptic tweet Thursday night with the Los Angeles Lakers struggling and trade speculation heating up, sparking some guesswork about what “The King” might be thinking.

Despite some massive performances from James, the Lakers are coming off four losses in their last five games, failing to make any headway in the standings as they look to get in the mix for a playoff spot.

The evening tweet from James to his 50 million-plus followers was simple, reading: “Make a Play (M.A.P).”

Speculation ran wild in the comments but it was pointed out that the tweet from James is a song from the artist Jerreau, which was released in 2016. An interesting lyric from the song goes: “First they love you then hate you, then they love you again. The same ones burning your jersey the same ones cheering again.”

More than a few joked that it should have read M.A.T, for “Make a Trade.” The Lakers have been involved in plenty of rumors but have yet to pull the trigger on a move, despite injuries mounting and the team struggling to string together wins.

James appeared to make a plea to the front office with some postgame comments in December, lamenting the fact that the Lakers were not in the mix for a title.

“I don’t wanna finish my career playing at this level from a team aspect. I still want to compete for championships. I know what I can bring to any ball club with the right pieces.”

James recently turned 38 but has not shown any signs of slowing down, averaging 29.8 points, 8.4 rebounds and 7.0 assists this season. The problem for the Lakers is that he’s averaging 36.3 minutes per game and has played 40-plus three times in their last eight games.

“I feel bad about that. He’s playing at an amazing level. But we can’t run him into the ground. That was one of my main goals coming into this season,” Lakers coach Darvin Ham said after a loss to the Kings on Wednesday. “We just have to manage him and have clarity in terms of scaling back his minutes some.”

As of January 19, the Lakers sit at 20-25 and are the No. 13 seed in the Western Conference. While that seems grim, the Lakers are just two games out of a playoff spot but need to turn things around in a hurry.

The Lakers are banged up, with Anthony Davis, Austin Reaves and Lonnie Walker IV all missing significant time.

Davis obviously provides the most significant hole in the lineup, with the All-Star playing at an MVP level before suffering a foot injury. His 27.4 points, 12.1 rebounds and intimidating presence on the defensive end are impossible to replicate but the Lakers have been able to play solid basketball with him out of the lineup.

The Lakers went on a five-game winning streak before losing four of their last five, with most of those losses have come down to the wire. James has stressed that the Lakers have to play mistake-free basketball to come out victorious in those close contests.

“We are limited with bodies,” James said. “So until some of our big guys or some of our key guys get back … we got to continue to play how we’ve played the last couple games. Play mistake-free basketball.”

James and the Lakers face a tough test in their next outing on Friday as they take on the 31-13 Memphis Grizzlies.