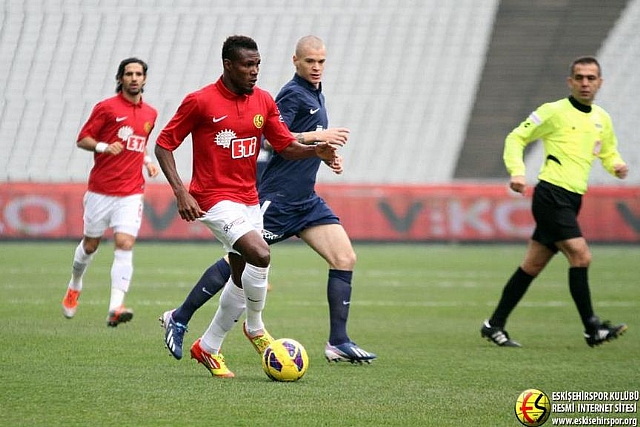 Ghana defender Jerry Akaminko played his first game for Eskiserhirspor in over six months in the friendly win over Qabala on Wednesday.

The 26-year-old who has been out since last June after damaging his ankle while in action for the Black Stars ahead of the 2014 World Cup, played the entire second half of the friendly match against the Azerbaijani side.

Akaminko has struggled to regain full fitness since suffering the injury which shattered his chance of playing at the World Cup.

But the strong defender appears to be on his way back to full fitness as he played. He got precious game time under his belt to continue with his recovery process as Eskiserhirspor thumped Qabala 3-1.

Akaminko expressed his delight at his imminent return to full fitness after the game.“Felt like a baby taking it’s first steps last night,” he said.“Not 100% yet, but happy to be back on the field. Thank you all for your kind words and prayers. JAKA will be back soon.”The former Maniaspor defender failed to recover in time to make Ghana’s squad for the 2015 Africa Cup of Nations.Akaminko was operated on in June – days after sustaining the ankle injury in a pre-World Cup friendly against the Netherlands.He was initially expected to be out for three months, but complications in his rehabilitation delayed his return.The central defender is expected to regain full fitness to help his club in the second-half of the Turkish season.He is also expected to rejoin the Black Stars after the 2015 Africa Cup of Nations.