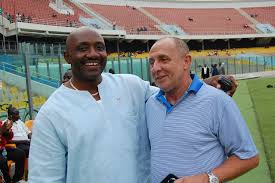 Former CEO of Hearts of Oak Harry Zakour has revealed that before the 2015/16 league season takes off the old directors will be meeting the current board chairman of the club Togbe Afede XIV to deliberate on the progress of the club.

The former directors led by Harry Zakour on many occasions have expressed their worry over the way they were pushed out of the club after the floatation of shares five years ago.

It could be recalled that last season it took the intervention of the old directors to rescue the club from being relegated as the club finished 13th on the log sheet.

And ahead of the yet to start Ghanaian season, the former CEO of the club has revealed that the old directors will meet the board chairman of the club to deliberate on the progress of the club.

“Before the league takes off, the old directors of the club will meet with Togbe to deliberate on the progress of the club and also to see what we can do to help the club move forward. We want to do this because of how we love the club,” Zakkuor revealed in an interview with Boss FM in Kumasi.