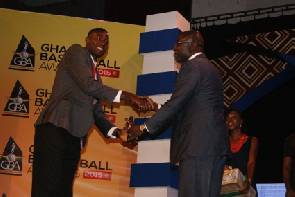 Accra Polytechnic’s Abdul Mutaleb Alhassan capped an incredible season by being crowned the Most Valuable Player of the 2015 Ghana Basketball season in a night of excitements, surprises and disappointments during the Awards Gala Nite.
The point guard, nicknamed ‘Varanda’ fended off competition from three other teammates Romeo Enan Wilfred, Baniba Norbert Dodzi and Daniel Nii Aryee to win the top individual award at Friday’s colourful gala in the studio of TV3.
Alhassan helped Accra Polytechnic and Braves of Custom to dominate the basketball calendar in the West African country in the 2014/15 season.
He becomes the second Accra Polytechnic team to clinch the top accolade after Baniba Norbert Dodzi scooped the award in 2013.
It’s fair to say that it’s been a fabulous season for the talented point guard who hits double figures to propel Accra Polytechnic to the double – winning the GHAPSA and UPAC Basketball Championships in Kumasi and Accra respectively.
It was expected to be a straight fight between Abdul Mutaleb and Romeo Enan Wilfred, who also excelled heavily with both club and school.
But the three-point expert warmed his way onto the podium as he was adjudged the best in Ghana following a superlative individual brilliance on the court as his consistency throughout the season mirrored that of Accra Polytechnic and Braves of Custom.

Arguably Ghana’s most skilled shooter, Abdul Mutaleb Alhassan is regarded as a ‘complete’ player with fans reacting positively to his success.

It was not dispirited night for Romeo Enan Wilfred as he scooped the Tertiary Player of the year, outfoxing Nana Owusu Agyei Afriyie (Kwame Nkrumah University of Science and Technology), Ibrahim Mohammed (University of Cape Coast) and Kingsley Quist (Zenith University College).
Edwin Appiah Sarkodie emerged the surprise winner of the High School Male Player of the Year after he beats competition from hugely tipped Mfantsipim duo Jamani Salifu Misheal and Daniel Owusu as well as Bompeh’s sensation Christopher Appiah.
Ahmadiyya’s Rachel Obeng finally grabbed the Female High School of the Year after missing out two years ago.
The Real Amass captain was adjudged the best after helping the Kumasi-based school to retain their Sprite Ball Championship crown, beating main rival Joana Dansoah to the title.

Isaac Kobina Owusu Mensah of Mfantsipim was crowned the High School Coach of the Year while Accra Polytechnic emerged Team of the Year.
Experienced trainer Brimah Lawal won the Coach of the Year for the second successive running after beating main challenger Emmanuel Quaye (Tema Youth and Braves of Custom).
Anthony Anane was voted the Referee of the Year to see off colleagues Samuel Badu, Olivia Agbenuzi and Eric Agyapong Ankamah.
The night belongs to Accra Polytechnic as they swept most of the awards on the night after a fine season.
The exciting night saw performances from Ghana’s finest and versatile artiste Okyeame Kwame as well as fast-rising stars Don Itchy and Wisa interspersed with cultural group performances from Humble Stars.
The four finalists for this year’s Ghana’s Most Beautiful were also present at the venue.
Top officials including the Chairman of the Ghana Basketball Association, David Addo-Ashong, representative of Ghana National Petroleum Corporation, Programmes Manager of TV3 and a representative of the British High Commissioner as well as officials of the Ministry of Youth and Sports graced the occasion amongst others.
Full classified awardees
Male High School Player of the Year – Edwin Appiah Sarkodie (Presec-Legon)
Female High School Player of the Year – Rachel Obeng (TI Amass)
High School Coach of the Year – Isaac Kobina Owusu Mensah (Mfantsipim)
Referee of the Year – Anthony Anane
Team of the Year – Accra Polytechnic
Coach of the Year – Brimah Lawal (Accra Polytechnic)
Overall Female MVP – Yayra Kluiboto (University of Cape Coast)
Overall Male MVP – Abdul Mutaleb Alhassan (Accra Polytechnic, CEPS)