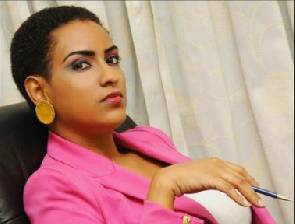 After successfully co-hosting the CAF Awards , actress Juliet Ibrahim has spoken about her desire to help the advancement of women’s football in the country.

Speaking to the media, Ibrahim spoke about her willingness when called upon to bring the women’s game forward.
She believes that involving female celebrities would attract the attention and needed sponsorship from companies which have been scarce over the years.
“I think it would help. [Involving female celebrities] would attract a lot of people to support women’s football.”

You know I am already into football where my foundation organized an all female celebrity soccer match to raise funds for charity so I am ready to help. Football is not only for men. ”
Juliet Ibrahim’s performance at the Confederation of African Football Awards was highly commended by viewers across the continent; many of them thrilled by her impressive command of French.